Transitions are the name of the game in democracy assistance and a change of leadership in the field’s flagship organization presents an opportunity to survey the terrain, says a prominent analyst.

“May you live in interesting times,” says an old Chinese curse and it’s certainly true that events from 9/11 and the Iraq War to the authoritarian resurgence and global pandemic have buried the complacent hubris of the Unipolar Moment, reminding us that advancing democracy is not a technocratic task, gliding along with the tide of history, but a labor of Sisyphus, ever-challenging, ever-contested.

Carl Gershman (above, end left) is not a household name, but in the world of democracy and governance everyone knows him, notes Daniel F. Runde, CSIS Senior Vice President, William A. Schreyer Chair and Director of the Project on Prosperity and Development.

Gershman’s work began in labor and progressive political circles, as a prolific scholar, activist, and later as a counselor to the U.S. Ambassador to the United Nations. At a time when there was relatively little academic or political activity in democracy promotion, Gershman became the indispensable figure of this nascent field, he writes for the Hill: 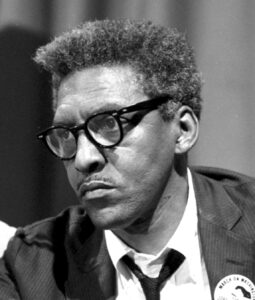 When the endowment was incorporated almost 40 years ago, a little over a third of the world’s population lived in a democracy. Today, that figure is well over half. ….. Nevertheless, it would be a mistake to draw a wholly positive conclusion from the work of the past four decades. Recent trends show the world moving in a worrying direction, with autocracies still outnumbering democracies and backsliding accelerating worldwide. The erosion of democracy is so widespread that scholars describe the current moment with terms such as “democratic recession” and “third wave of autocratization.”

A case in point is Latin America and the Caribbean* where “we are witnessing severe challenges to democratic governance and the pandemic is exacerbating the region’s social and economic inequalities, driving people to new levels of desperation for fundamental rights and freedoms,” said U.S. Senator Bob Menendez (D-N.J. – see below), Chairman of the Senate Foreign Relations Committee. Other regions also present urgent challenges, he said in remarks at a hearing to review the FY 2022 budget request for the U.S. Agency for International Development (USAID), attended by USAID Administrator Samantha Power.

“Many of our Afghan partners who championed democracy and human rights are unable to apply for the Special Immigrant Visa program or other existing channels to protect Afghan allies,” Menendez added. “The protracted conflict in Ethiopia, a fragile transition in Sudan, coups in Mali and Chad that are diminishing efforts to counter extremism in the Sahel, and Nigeria, the so called ‘anchor state’ in west Africa is beset by terrorism, conflict and democratic backsliding.” 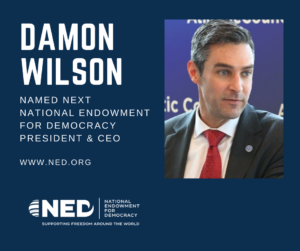 The NED’s Board of Directors unanimously voted to approve Damon Wilson, currently Executive Vice President of the Atlantic Council, as NED’s next president and chief executive officer, to succeed a predecessor whose legacy is as much inspirational as institutional.

“Carl Gershman’s greatest legacy is not the NED itself, but the thousands of professionals who were trained at the NED’s four core institutions as well as the thousands of grassroots grantees who have gone on to leadership roles in strengthening democratic societies around the world,” CSIS’s Runde observes. “His efforts have expanded into a veritable industry of visible and practical support for democratic values and practices and a normative expectation for democratic government worldwide.”

For 40 years, the NED has been a stalwart force for democracy promotion and assistance. In its time, the world has seen significant change. Four decades ago, a little over a third of the world’s population lived in a democracy. Today, that figure is well over half. The percentage of democratic governments around the world has doubled in that same period. Nevertheless, recent trends show the world moving in a worrying direction, with autocracies still outnumbering democracies and backsliding accelerating worldwide. Join CSIS for a conversation with Carl Gershman, Daniel Runde and Elizabeth Hoffman, CSIS Director of Congressional and Government Affairs, to discuss the successes and struggles of the last 40 years and the future of democracy. REGISTER HERE. The event will be webcast live from this page.

*The Carnegie Endowment hosts a discussion on Reimagining Regional Governance in Latin America – July 20, 11:00 am EDT with authors Federico Merke and Oliver Stuenkel. Moderated by Thomas Carothers with comments from Natalia Saltalam and Michael Shifter. RSVP