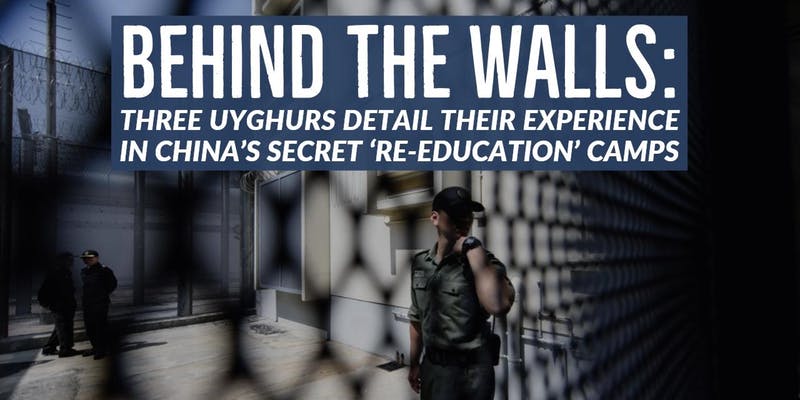 Radio Free Asia’s Uyghur Service has consistently documented the worsening human rights situation in China’s Far West, also known as the Xinjiang Uyghur Autonomous Region (XUAR) through its journalism in one of the world’s most difficult media environments, the National Endowment for Democracy reports. This has included the vast incarcerations of 1 million or more adults in “re-education camps,” which began last year. RFA Uyghur service recently interviewed three former detainees from these camps who described the conditions and what life is like behind the walls for the men, women, and even children arbitrarily detained on a daily basis.

For this project, RFA also filmed inside Xinjiang, capturing images of daily life in a surveillance state for the Uyghur people. While China continues to deny the existence of such political reeducation camps, the testimonies of these three detainees make clear not only the existence of such camps but also the way they are operated and how the detainees are treated as prisoners. This project – the focus of a forthcoming event at the National Endowment for Democracy – gives a rare glimpse into a situation that has begun to raise concerns around the world about what’s being described as a new apartheid state.

A BuzzFeed journalist who was due to speak at the meeting has since dropped out in what appears to be an instance of the latest corporate submission to Beijing’s sharp power.

China has already expelled a BuzzFeed journalist who reported on mass detentions and surveillance, RFA notes.

All attendees must RSVP in advance online, as there will be no on-site registration.

Click here to watch the livestream of the event.

Sophie Richardson is the China director at Human Rights Watch. Dr. Richardson is the author of China, Cambodia, and the Five Principles of Peaceful Coexistence, an in-depth examination of China’s foreign policy since 1954, and numerous articles on domestic Chinese political reform, democratization, and human rights in China and East Asia. She has testified before the European Parliament and the US Senate and House of Representatives, and has provided commentary to the BBC, CNN, the New York Times, the Wall Street Journal, and the Washington Post.

Nury Turkel is an attorney in Washington, D.C., and serves as Chairman of the Board for the Uyghur Human Rights Project (UHRP) in Washington, D.C., which works on Uighur human rights research and documentation projects. He has testified before the U.S. Congress and given presentations at various universities, government institutions, and foreign policy forums, has written commentaries on policy and legal matters in major U.S. publications, and has appeared on radio and television programs.

Mamatjan Juma has been a journalist with Radio Free Asia’s Uyghur Service for 12 years, and grew up in China’s Uyghur region before coming to the United States in 2003. As the service’s Deputy Director, he oversees day-to-day operations and reports on events inside China’s Uyghur region and beyond. He graduated from Washington University in St. Louis, MO with a Master of Arts. Prior to coming the United States, Mamatjan studied and taught art at the Xinjiang Art College, earning his bachelor’s degree in 1996.

Brian Joseph is Vice President for the Asia, Global and Middle East and North Africa Programs at the National Endowment for Democracy.