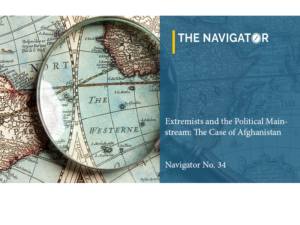 A key challenge for Countering Violent Extremism (CVE) policies and programs is bringing extremists into the political mainstream, notes Kamran Bokhari. For many Muslim-majority states, the mainstream is contested space. These states are struggling to establish a monopoly over religious discourse and citizenship, and to varying degrees, are undemocratic political economies. As in the case of Afghanistan, under such circumstances, the extremists are contaminating whatever semblance of a mainstream there is rather than being integrated into it, he writes for the Center for Global Policy:

The case of the Afghan Taliban underscores how attempts to moderate radical Islamists are unlikely to succeed in Muslim states that lack a strong democratic political economy. The likely outcome will be that the radicals – taking advantage of the fact that there is no well-defined political mainstream – will be able to forge an Islamist autocracy or at the very least a state of anarchy. While there is a great deal of research underway that seeks to unpack the process of radicalization, Washington needs to devote greater resources to understanding the reverse process of moderation. This has massive implications for the growing number of civil wars in the Middle East and beyond, where Islamist insurrectionists of various stripes dominate the growing number of battlespaces and where the U.S. will have to mediate negotiated settlements.

In an Open Letter to the Taliban, an American who helped open secret negotiations with the group calls for them to accept a ceasefire and peace talks with the Afghan government, The New Yorker reports. Steve Coll reveals in his new book, “Directorate S,” that, when some of your leaders tried to participate in the peace process agreed to at Bonn, Vice-President Dick Cheney ordered them imprisoned at Guantánamo or Bagram, writes Barnett Rubin:

Three and a half years later, with the help of U.S. Ambassador Zalmay Khalilzad,* a Taliban delegation again began negotiating an agreement with the government in Kabul. But Khalilzad’s bosses in Washington declined to provide security guarantees to Taliban who joined the peace process. You concluded that you had no alternative but to continue fighting from your safe haven in Pakistan, whose military has supported you for its own reasons. The U.S. rejection of talks made you hostages to the Pakistan military.

Kamran Bokhari is the Director of Strategy and Programs at the Center for Global Policy. He also is a senior analyst with the intelligence firm Geopolitical Futures, and a Fellow with the Program on Extremism at George Washington University’s Center for Cyber & Homeland Security.