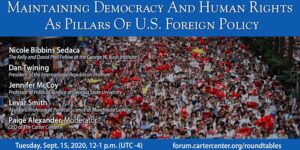 The U.S. should re-engage with multilateral institutions, while communicating to allies and partners that U.S. relations with them are based on shared values, a new report suggests.

“[A]utocratic leaders should be put on notice that the United States will hold them accountable for violations of human rights and efforts to repress their citizens” and the U.S. should prioritize “serious dangers Americans and the world face from global threats, including climate change, pandemics, authoritarianism and nuclear proliferation,” adds the report, prepared by the Democratic staff of the Senate Foreign Relations Committee.

“Halting the decline of global freedom and democracy must be a critical objective of U.S.
foreign policy,” it adds. “Thriving, vibrant democracies around the world improve U.S. safety, security, and prosperity.”

The 2016 election was hardly the first time that the U.S. political system alarmed many of the United States’ partners broad. After the election of 1832, the British complained that the United States was governed by “demagogues and non-entities,” and versions of that grievance have been repeated regularly by allied leaders since, notes Kori Schake, Director of Foreign and Defense Policy Studies at the American Enterprise Institute and the author of Safe Passage: The Transition From British to American Hegemony. 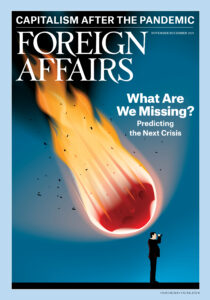 Even before the start of the coronavirus pandemic earlier this year, support for the United States had plummeted to historic lows, but the U.S. now faces the prospect of “snarling into decline,” she writes for Foreign Affairs:

The admiration for the United States that reduces the cost of everything it tries to achieve in the world will evaporate, and other countries will move on, shaping a new order to protect themselves from a self-seeking, often hostile United States. Washington will find that it has squandered an international order that was built to enhance its security and sustain its prosperity and instead faces a world without the institutions, alliances, and goodwill that have long bolstered U.S. interests.

“Faith in the United States as the standard-bearer of democracy has eroded all over Europe,” former British ambassador to the US Peter Wittig wrote in the current edition of Foreign Affairs.

“Style and tonality matters,” he said in an interview. But “I think people don’t really expect U-turns. They know that Europe has become less important to the Americans, that attention will be absorbed by China and Russia. Nobody expects to go back to the status quo ante.”

Plans to host a “Summit for Democracy” with all ideologically like-minded nations to reaffirm U.S. leadership, alliances and commitments would be one indication that “the last four years were an aberration and not representative of what America is and aspires to be,” predicted Antony Blinken, the Biden campaign’s senior foreign policy adviser, The Post adds. 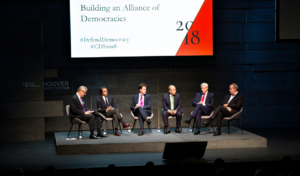 It’s normal for foreign policy to be on the back burner during elections, adds Elizabeth Saunders, one of The Monkey Cage’s senior editors, and an associate professor in the School of Foreign Service at Georgetown University. Most voters don’t pay close attention to foreign policy, and that’s consistent with decades of research on how voters make sense of complex issues using shortcuts — like cues from elites — that interact with their predispositions.

International lawyer David Tafuri supports collective action, “soft” power and a return to the view of recent Democratic and Republican presidents that incentivizing democratization is imperative, he writes for The Hill.

While the first and best thing Americans can do for the cause of human freedom, democracy, and dignity is to defend those values at home, they still have considerable tools and influence with which they can support those values around the world, Matthew Duss writes for Foreign Affairs.