The Future of Democracy in Southeast Asia: More Discontent or Hope? @Diplomat_APAC https://t.co/mlzwI58boL

Polarization is feeding on long-standing political divisions and clashing social identities, including those of majority communities that feel aggrieved or threatened despite their electoral dominance. It has intensified during the past two decades, propelled by powerful factors from rapid economic development to gradual societal shifts. It is damaging democracy, civil society, social cohesion, and the rights of minority groups, those are some of the “sobering” conclusions of Political Polarization in South and Southeast Asia: Old Divisions, New Dangers, a new analysis from the Carnegie Endowment for International Peace.

In five of the six country cases considered —India, Indonesia, Malaysia, Sri Lanka, and Thailand—long-standing sociopolitical divisions have become inflamed during the past two decades and clearly represent a threat to democratic governance and social cohesion. In numerous other countries throughout these regions—such as Afghanistan, Bangladesh, Myanmar, Nepal, and Pakistan—the power and dangers of deep sociopolitical and sociocultural divides are similarly evident, note editors Thomas Carothers and Andrew O’Donohue. 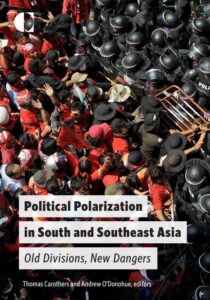 The diverse experiences examined in the report suggest four overarching guidelines for domestic and transnational actors designing, implementing, or evaluating efforts to contain polarization, they conclude: