ISIS’s propaganda machine is going dark as the group is cleared from its final strongholds in Iraq and Syria, notes Milo Comerford, Analyst and Research Innovation Officer at the Tony Blair Institute’s Co-Existence project. Quietly in the shadows, accompanying ISIS’s territorial demise has been an equal and opposite resurgence by its jihadi rival, al-Qaeda, he writes:

As ISIS has declined, al-Qaeda has experienced a “resurrection”, according to terrorism scholar Bruce Hoffman. Through its loose archipelago of franchises, the latter group has consolidated and entrenched itself in conflict zones worldwide, including the Sahel, the Horn of Africa, the Caucasus, Afghanistan/Pakistan, Syria, Yemen and Kashmir. ISIS “can no longer compete” with its older sibling “in terms of influence, reach, manpower, or cohesion”, Hoffman notes.

Counter-terrorism policymakers globally must not ignore long-standing threats, but rather learn lessons from al-Qaeda’s resilience, acknowledging that military victory, whether in Afghanistan or the Levant, is only half the battle against extremist ideologies, Comerford concludes.

Can political pluralism serve as an antidote to violent extremism in the MENA region?

The political landscape of the Middle East and North Africa in 2018 is a terrain deeply hostile to nurturing the seeds of democracy planted during the Arab Uprisings, a new report argues. 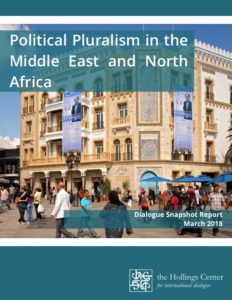 Since the apparent promise of the Arab Spring was squelched, “the voices of civil society advocating for democracy, pluralism, and a rights-based politics have largely been silenced,” notes Peter Mandaville of George Mason University. Nonetheless, it is important to realize that they are still very much alive, if not always quite kicking. A generation of young, publicly-engaged Arab citizens whose social and political consciousness was shaped first and foremost by the events of 2011 are striving to make space for civic engagement, he writes in Political Pluralism in the Middle East and North Africa, a report from the Hollings Center:

This is not a naïve effort imagining an imminent return to the period of post-revolutionary hope, but rather a firm conviction that, despite the current dismal state of the region, something fundamental changed in 2011 that means things will never fully return to the pre-Arab Uprisings status quo. For this up-and-coming generation, the task today is not one of conventional mobilization or competing for a place at the political table—goals they realize would, in any case, be pointless to pursue at the present time. Political pluralism is not the formal or procedural trappings of democracy, but the challenge of making slow but consistent progress on rebuilding the social, cultural, and communicative infrastructures that foster a meaningful self-conception of citizenship.

Masculinity, not ideology, drives violent extremism, according to Michael Kimmel’s new book, “Healing From Hate: How Young Men Get Into — and Out of — Violent Extremism,” notes Dina Temple-Raston, NPR’s counterterrorism correspondent.

If true — and Kimmel makes a compelling case that it is — that could be good news for rehabilitation, because it is much easier to challenge violent extremism by engaging these young men as men, instead of trying to convince them that an ideology they may have embraced is flawed, she writes for the Washington Post.  Kimmel draws on the testimony of “formers,” she adds, including Maajid Nawaz, a former violent jihadist and one of the leaders of British think tank Quilliam.

Promoting political pluralism and democratic norms is the only long-term sustainable solution to jihadist radicalization, according to three regional civil society figures who addressed a recent Washington Institute Policy Forum (above). Aboubakr Jamai, a Moroccan journalist and dean at IAU College; Lobna Jeribi, founder of the think tank Solidar Tunisia (a National Endowment for Democracy grantee); and Oussama Sghaier, a member of Tunisia’s Ennahda Party. They were joined by Bilal Wahab, the Institute’s Wagner Fellow.