Trade is just an opening shot in a wider US-China conflict https://t.co/LMxJV7FbU8 via @financialtimes

U.K. Foreign Secretary Dominic Raab has told his officials to work carefully to manage relations with the U.S. and China — and avoid becoming trapped in a new “Cold War” between the two countries, Bloomberg reports.

His comments coincided with China’s Premier Li Keqiang presentation to a virtual World Economic Forum. “In my view we need to abandon such a notion (of a new Cold War),” he said. The world today is drastically different from the time of Cold War. We need to stabilize China-US relations and advance cooperation between the two countries.”

The West still doesn’t understand the scale of Beijing’s sharp-power ambitions, says Yi-Zheng Lian,  a former chief editor of The Hong Kong Economic Journal. Even analysts who fear the Chinese Communist Party’s global aspirations have underestimated some of its inroads. Western governments have been on to China’s hard-power geopolitical-choke-point strategy. But they are only just beginning to appreciate its far more invasive soft-power strategy — and it might already be too late, he writes for The Times.

Authoritarian regimes thrive on their people’s false perception that the world is deaf to their sufferings, say Scott Cullinane and Richard Kraemer of the US-Europe Alliance. Now is the time for the U.S. and its allies to stand together with the imposition of a new Jackson-Vanik amendment specifically updated for today’s China. The transatlantic community must show the freedom-loving peoples of China that they are not alone, they write for The Hill.

In the U.S., foreign policy/national security community discourse about COVID-19 has been so much more about how it impacts “great power competition” (GPC) than about pandemic prevention as its own strategic and diplomatic challenges, says Duke University Professor Bruce W. Jentleson.

In many respects, the GPC strategic paradigm’s resurgence is understandable, he adds, citing New Yorker journalist Evan Osnos’s observation that after almost two decades of “unwinnable slogs in Afghanistan and the Middle East, the prospect of reprising the Cold War—the last major conflict that Washington won—offers the familiar comfort of an old boot.”

But as a line of argument, the democracies versus autocracies ideological formulation has four fundamental flaws, he writes for The Washington Quarterly:

Framing the U.S.-China conflict between as an ideological battle —democracy, freedom, and a capitalist market economy, and the opposing values held by the Chinese counterpart – is oversimplified, according to analysts Yao-Yuan Yeh, Charles K.S. Wu, Austin Wang, and Fang-Yu Chen.

The truth is, many countries are struggling to commit to one and only one bloc, and the current global order is not neatly divided into two camps. Instead of using institutional and value differences to carve up two blocs, shared historical ties, opposition to U.S. leadership, and dependency on Chinese state capitalism are better indicators to characterize countries in the new bipolar international system, they write for The National Interest.

The biggest problem of seeing the China challenge as a repeat of the Cold War is this: Western leaders appear not to be taking seriously enough the scale of the confrontation they are heading toward, argues Nick Bisley, Professor of International Relations at La Trobe University.

The Cold War was won in Europe — but only after 50 years. And that included the US having a significant economic head start in 1945. There is no sign Washington and its fellow travellers have begun to think through, let alone prepare for, a similar multi-decade fight across all domains against the world’s most populous country, he writes for The Conversation.

Even given recent Chinese atrocities against the Uighurs and China’s blatant crackdown on Hong Kong, the mobilizing effect of democracy promotion pitches is much overrated, claims Jentleson, a former Senior Advisor to the  State Department Policy Planning Director. Of 26 foreign policy goals in a 2018 Pew poll, promoting democracy in other nations came out 25th with only 17 percent support; promoting and defending human rights only a bit better at 19th and 31 percent support. Even in the heady days immediately post-Cold War, democracy and human rights promotion only got 22 percent support.

If we are to avoid a new Cold War, there are fundamental questions the U.S. and China will need to answer, says Brookings analyst Jeffrey A. Bader:

Whether we apply professor Barry Posen’s conception of grand strategy as “a nation-state’s theory about how it can produce security for itself”; historian Hal Brands’ “the theory, or logic, that guides leaders seeking security in a complex and insecure world”; or scholar Paul Kennedy’s “the capacity of the nation’s leaders to bring together all of the elements, both military and nonmilitary, for the preservation and enhancement of the nation’s long-term (that is, in wartime and peacetime) best interests”, three criteria can be derived for assessing competing claims for strategic prioritization, Jentleson adds:

US-China policies need to get the resources, bandwidth, and creative strategizing for managing this rivalry (US-Russia as well), but pandemic and environmental mass destruction prevention (P-EMD) should be at the center of US grand strategy going forward, Jentleson argues. They constitute even more severe and imminent threats. Policies for dealing with them have greater viability with the interests of allies and partners {and} are conducive to more sustainable domestic support bases. RTWT 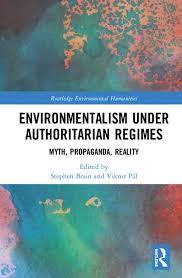 But other analysts dispute China’s capacity and willingness to forego the projection of what the National Endowment for Democracy calls ‘sharp power’ and commit to protecting global public goods.

Essays and books with titles like “Will China Save the Planet?” and “The Coming of Environmental Authoritarianism” typically praise Chinese promises to fight climate change. But then, too often, some foreign admirers turn to wondering—with varying degrees of regret—whether the coercive powers of a dictatorship may be the only way to curb unsustainable ecological behaviours, The Economist notes.

Examine the record, and in reality Chinese authoritarianism more often undercuts green goals. At moments, it is hard to tell whether the driving force behind a green policy is a desire for a cleaner environment, or an obsession with social controls. RTWT