International Anti-Corruption Day may be over, but the scourge of political graft and demands for good governance remain, as the newly-released tranche of Afghanistan papers confirms.

The U.S. Treasury has imposed sanctions on a businessman and a senior government official with close links to Cambodian Prime Minister Hun Sen, accusing them of corruption, Reuters reports. It also sanctioned Aivars Lembergs, the suspended mayor of Latvia’s seaport city of Ventspils and an oligarch with substantial influence in the country’s politics, over alleged corruption (HT:FDD).

Where and why does the West fail in its global crusade against corruption, how can this be set right and how can the unintended consequences of such interventions lead all the way to a presidential impeachment? asks Alina Mungiu-Pippidi, professor of policy analysis at the Hertie School of Governance, where she is chair of the European Research Centre for Anti-Corruption and State Building Research.

The motives of a benevolent foreign entity seeking to promote integrity are seldom pure. Perhaps this is why former colonies are statistically more prone to corruption than states that have never been colonized, notes Mungiu-Pippidi,* who delivered this year’s Seymour Martin Lipset lecture (above): 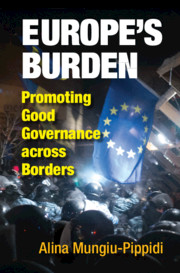 Achieving good governance is a domestic political process by which countries manage to succeed in the collective act of controlling ruling elites from abusing office for their profit. Even if the West has always been a source of emulation, the process needs to be grounded in local political dynamics and driven by domestic actors to work out. Even Napoleon’s intervention in other countries to build modern government, with which the book opens, is no exception to this rule: it worked only in Switzerland, and failed everywhere else. And contemporary success stories- from Botswana to Estonia- confirm the rule.

Mungiu-Pippidi’s forthcoming book Europe’s Burden. Promoting good governance across borders investigates the efficacy of the European Union’s promotion of good governance through its funding and conditionalities both within EU proper and in the developing world. The evidence assembled shows that the idea of European power to transform the quality of governance is largely a myth.

*A former Reagan-Fascell Fellow at the National Endowment for Democracy and contributor to the NED’s Journal of Democracy.