Chinese authorities are putting the children of Uyghurs and other ethnic minority groups into dozens of state-run orphanages across the western Xinjiang region even if their parents are not dead, as some 1 million adults in their families are sent to internment camps, according to news reports.

Pakistan has urged China to ease pressure on the country’s Muslim minorities, The Independent adds, after a Human Rights Watch report said Beijing’s Communist authorities had begun installing QR codes on the homes of the Uighur Muslims in order to obtain instant access to their personal details.

Pakistan’s move is a major departure. Most Muslim states and the the Organisation of Islamic Cooperation have been lamentably silent on the abuse of Uighur human rights, said Carl Gershman, president of the National Endowment for Democracy. The notable exception is Malaysia’s Inwar Ibrahim, who is projected to be the country’s next premier, he told a NED-hosted event on China’s secret re-education camps.

The event was held to unveil a new Radio Free Asia (RFA) video documentary featuring former Uyghur inmates of the notorious “political re-education camps” in China’s Xinjiang Uyghur Autonomous Region (XUAR). “Behind the Walls: Three Uyghurs Detail their Experience in China’s Secret ‘Re-education’ Camps” includes recent interviews with three former detainees, who describe conditions for those arbitrarily detained in facilities estimated to hold or to have held in excess of 1 million Uyghurs.

“Among those suffering human rights abuses around the world, the current plight of the Uyghur people stands out,” said Min Mitchell, Managing Director for East Asia, who produced the project. “RFA has been among the first to shine a journalistic light on the situation to ensure Uyghurs are not forgotten.”

“These interviews with people who were once behind the walls capture more than their suffering. Their personal stories help us to come to grips with a reality of vast proportions affecting millions.”

Some members of the Uighur community allege that China is committing a cultural genocide, notes Kate Cronin-Furman, a Lecturer in Human Rights in the Department of Political Science at University College London.

Uighur activists point to the forced separation of families, the targeting of scholars and other community leaders for detention and “reeducation,” the bans on Uighur language instruction in schools, the razing of mosques, and the onerous restrictions on signifiers of cultural identity such as hair, dress, and baby names as evidence that China is trying to eradicate the Uighur identity, she writes for Foreign Policy. 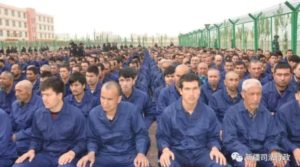 The regime deliberately targets Uyghur elites – intellectuals, religious leaders and business figures in order to undermine the collective Uyghur ‘brain,’ said Mamatjan Juma, a journalist with Radio Free Asia’s Uyghur Service for 12 years. The detention of 58 reputable scholars for ‘retraining’ demonstrates that the CCP’s objective is to destroy Uyghur culture.

Sophie Richardson, the China director at Human Rights Watch, cited parallels with the plight of Myanmar’s Rohingya minority, noting that China’s power within the United Nations had effectively vetoed discussion of abuses in Xinjiang.  Rights advocates can’t even secure a joint statement, let alone a Special Rapporteur or a Security Council discussion. There should at least be an international contact group to detail information and demand access, she told the NED meeting.

Given China’s growing leverage on the world scene, we can expect to see more examples of its efforts to weaken the international human rights system, according to Ted Piccone, a Senior Fellow at the Brookings Institution’s Project on International Order and Strategy.

“Countervailing forces—domestic and international pressure to uphold international human rights norms and mechanisms—are still important but may lose influence given current geopolitical trends, the U.S. retreat from leadership of key international institutions, and ongoing attacks on civil society and the media,” he writes in a new paper, China’s long game on human rights at the United Nations.

The report recommends “revitalizing a cross-regional coalition of democratic states to consolidate the gains of the international human rights system, fight Chinese attempts to undermine them, and protect civil society’s vital role as independent watchdogs for upholding universal norms.”

There is a strategic “realist” case for defending Uyghur rights, says a prominent analyst.

“Holding China to account for its human-rights violations against the Uighurs is a component in a realist approach that also seeks to limit the Chinese navy in the South China Sea,” argues Robert D. Kaplan, a senior fellow at the Center for a New American Security and a senior adviser at Eurasia Group. “Just as China’s suppression of the Uighurs is part of its grand strategy, America’s commitment to human rights in China should be part of its own approach,” he writes for The Wall Street Journal.

Washington’s current approach of zero-sum bilateralism “forfeits the strongest asset the U.S. has in this struggle: a system of alliances undergirded by the American ideals of free markets, civil society and human rights,” Kaplan contends.