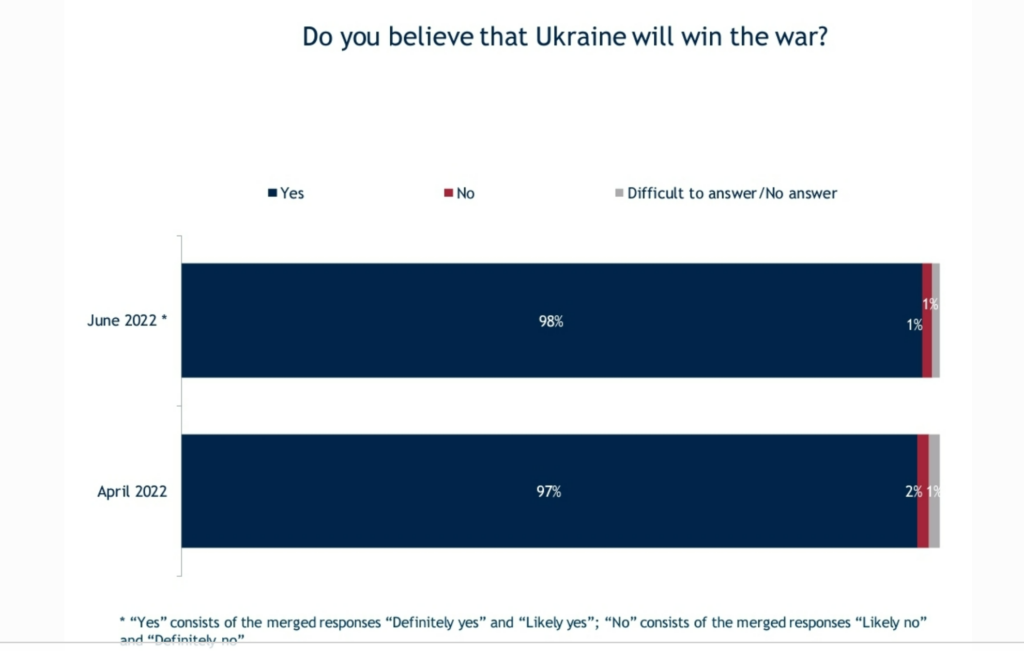 Some 98% of Ukrainians believe their country will definitely or likely win the war against Russia, according to the latest public opinion survey conducted by the International Republican Institute (IRI). East Ukraine is the least optimistic, but even there, 94% think Ukraine will win.

“The information gathered from this poll is confirmation from our previous survey,” said Stephen Nix, Senior Director for IRI’s Eurasia Division. “Ukrainians are very firm in their conviction that they will be victorious in the conflict against Russia, and they overwhelmingly support the actions of their wartime president.”

The survey shows that confidence in winning the war and approval for President Zelensky remain robust. Most Ukrainians do not believe in conceding any territory and support for NATO membership has spiked, Euromaidan reports.

The war in Ukraine has undermined the West’s appeasers, yet plenty of Western intellectuals and politicians still ignore what Moscow is saying loud and clear, notes Alexey Kovalev, an investigative editor at Meduza. One of my most revealing interviews was with Polina Kovalevskaya, a refugee from Mariupol, which was already a mass grave by the time she and her family escaped. When I asked them for a photo of their former home, they sent me a video instead, he writes for Foreign Policy:

What makes the video so chilling wasn’t just the fact that targeting civilians is a war crime. It’s that the clip bears the unmistakable logo of RT, the Russian channel that started off in 2005 as a mostly benign attempt to improve Russia’s international image and ended up as a domestic disinformation bullhorn. The video’s unequivocal message: This is what we’re doing in Ukraine, and we’re not even going to pretend anything else. 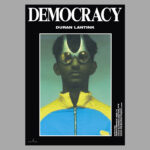 Rather than rejecting outright any claim that Russia has imperial ambitions, this alternative framing of the existential threat as coming from democracy and not NATO forces us to ask what ambitions Putin has to offer to the people who support him and his allies, he writes for Encompass. 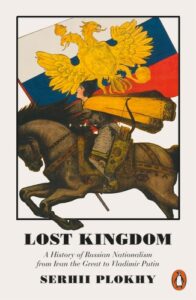 t’s is worth examining other factors that might be motivating the Russian president and his advisors, adds Newcastle University’s Dariusz Gafijczuk. One of these was neatly summed up by historian Serhii Plokhy in his 2018 study, Lost Kingdom, A History of Russian Nationalism from Ivan the Great to Vladimir Putin, he writes for The Conversation:

Russia today has enormous difficulty in reconciling the mental maps of Russian ethnicity, culture, and identity with the political map of Russian Federation.

Ukraine’s resilient response to Russian aggression highlights the country’s commitment to democratic values and active citizen participation, adds Mehri Druckman, IREX’s Country Director for Ukraine and Chief of Party for the USAID-funded Ukraine National Identity Through Youth (UNITY) program. As the war rages around them, young Ukrainians are also volunteering in large numbers to distribute humanitarian aid through digital platforms like SpivDiia that match people’s needs with resources from businesses and private individuals, she writes for the Atlantic Council.

Russian strategy toward Ukraine is designed to demoralize and demotivate, notes Anne Applebaum. But it encounters a potent countervailing force in the form of activists and volonteri in groups like Anna Bondarenko‘s Ukrainian Volunteer Service (UVS) and Mikhail Reva’s Reva Foundation, which has drawn not just on Ukrainian civil society to support the Ukrainian army, but civil society in many countries, she writes for The Atlantic.