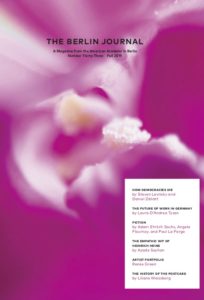 Three decades ago this fall, a political earthquake rocked the barrier that had divided Europe and the city of Berlin for nearly five decades. The so-called Autumn of Nations saw protesters from across Eastern Europe publicly oppose one-party rule and state oppression. The anniversary is a reminder both of the fragility and substance of democracy, notes Berlin Journal editor Jay Magill, Jr.:

Democracy, after all, is no given; it survives only when people and governments uphold democratic values, when they behave and think democratically “in the living relations of person to person,” as John Dewey wrote—when citizens deliberately choose self-governance. This choice depends in part upon economic prosperity, an important point to keep in mind as digitalization portends fewer jobs, less transparency, and more attempts to spread disinformation throughout the body politic.

With Russia’s ongoing use of hybrid warfare to undermine its neighbors, what steps can states take to counter disinformation and protect democracy? the International Republican Institute’s Sean Nottoli asks. He explains how IRI’s >versus< media monitoring tool supports the Baltic states in the battle against Russian propaganda.

Rather than functioning as liberation technology, whistle-blowers like Google’s former in-house ethicist, Tristan Harris, have popularized the idea that phones are unhealthy and addictive, the New York Times adds.

“Books advocating for better self-control distract the public from the truly alarming issues created by technology at a time when we need urgent change,” he said. “Millions of kids have been downgraded by tech platforms. Misinformation on the climate crisis runs rampant, destroying truth and stalling action. Our democratic processes are suffering.”

In his latest publication, “Information Wars: How We Lost the Global Battle Against Disinformation and What We Can Do About It”, Richard Stengel, provides the first and only insider account of how the U.S. government tried—and failed—to combat the global rise of disinformation that poisoned the 2016 election, the Atlantic Council notes. From his unique vantage point, Stengel writes about seeing a tsunami of Russian disinformation after Putin’s annexation of Crimea in 2014, and the weaponization of information and grievance by ISIS and Russia, and then how the Russians turned their sights on the U.S. election.

In the spirit of highlighting the fragility and substance of democracy, Magill adds [HT: American Interest], the latest issue of the Berlin Journal opens with a suite of related essays, the first by fellow Daniel Ziblatt and his Harvard colleague Steven Levitsky, from their book, How Democracies Die; the second by fellow Steven Klein, about the role of debt in the political economies of post-WWII democracies; and the third by Laura D’Andrea Tyson, who takes an extended look at how Germany is successfully navigating social change as automation takes hold of parts of its industrial sector.

Please join the Atlantic Council’s Digital Forensic Research Lab for the launch of Richard Stengel’s latest publication, “Information Wars: How We Lost the Global Battle Against Disinformation and What We Can Do About It”. In a conversation hosted by the Digital Forensic Research Lab, the former editor-in-chief of Time and Under Secretary of State for Public Diplomacy and Public Affairs in the Obama administration will explain not only why disinformation is a threat to democracy, but what we can do about it.