Frank Dikötter’s new book, “How to Be a Dictator: The Cult of Personality in the Twentieth Century”, a lively analysis of those eight 20th-century dictators, aspires to be a guidebook of dictator tactics. But the eight autocrats were not altogether uniform in their methods of obtaining, retaining or losing power, and certainly not in their abilities, Conrad Black writes for The Spectator: 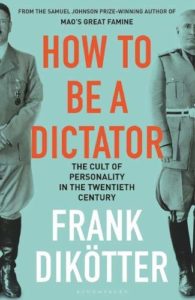 Stalin, Mao, Kim and Duvalier died in office to great public lamentations. Kim’s grandson holds his position; an ostensible heir is in Mao’s old chair. Vladimir Putin, though not nominally a communist or remotely as powerful or brutal as Stalin, invokes aspects of his memory, especially in opposing Russia’s would-be westernizers and in purporting to rebuild Russia’s world influence. Duvalier’s son and heir Jean-Claude ‘Baby Doc’ Duvalier was sent packing (with full pockets), but only after plundering his poor country for a further 15 years.

“We tend to denounce anyone we don’t like as a dictator,” Dikötter said during a Q&A session about the book at the Cato Institute, Stella Morabito writes for The Federalist.

“I think it’s very dangerous to start comparing what might occasionally be seen as the buffoonery of one man to the horrendous crimes against humanity committed by true dictators,” he said. “A cult of personality is when nobody knows who thinks what. When I open a newspaper in this country, it’s pretty clear who thinks what.”

Can contemporary authoritarians be compared to 20th-century dictators? Not exactly, given the absence of coherent ideology, mass violence and weak cult of personality.

Skeptics like Jan-Werner Müller – author of What is Populism? – reject contemporary analogies to twentieth-century fascism as mistaken in part because new authoritarian-populist regimes are aware that the term bears an intolerable stigma, notes Peter E. Gordon, the Amabel B. James Professor of History at Harvard.

Today’s anti-democrats, Müller observes, “have learned from history” that “they cannot be seen to be carrying out mass human rights violations.” But this argument doesn’t refute the analogy; it confirms it, . The new regimes can find ways to adopt the strategies of the past even as they publicly disavow any resemblance, he writes for The New York Review of Books.

Perhaps modern autocrats are channeling their inner Plato, as Aeon suggests. The above short animation from BBC Radio 4 explains why Plato had little love for democracy, and believed that it was the true elite – trained philosophers, of course – who should steer the ship of state.

The National Endowment for Democracy (NED) has named William (“Will”) Dobson (right) as the new coeditor of The Journal of Democracy, the world’s leading publication on the theory and practice of democracy. Formerly Chief International Editor for National Public Radio, Dobson succeeds Marc F. Plattner, who is retiring after decades of outstanding service.

Dobson formerly held senior editorial posts at Foreign Affairs, Foreign Policy, and Slate. His 2012 book, The Dictator’s Learning Curve: Inside the Global Battle for Democracy, outlined for wide audiences the ways in which repressive regimes have adapted to retain and increase their power, and how courageous activists have responded to confront these tactics.