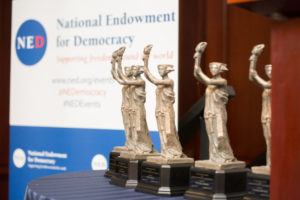 America’s most potent weapon in its emerging contest for supremacy with China is not its economy, nor its aircraft carriers, but its ideas, says a prominent analyst. The notion that abstract principles like “freedom” and “democracy” are powerful American assets is sometimes dismissed as liberal wishful-thinking. But Chinese actions suggest otherwise, the FT’s Gideon Rachman writes:

The government of Mr Xi does its utmost to suppress the circulation of liberal and western ideas, censoring the internet and cracking down on dissidents, students and human rights lawyers. The fact that previous US presidents spoke up for human rights was more than an irritant to the Chinese one-party state — it was a threat. There was no better symbol of this than the “Goddess of Democracy”, built by pro-democracy demonstrators in Tiananmen Square in 1989, which bore an uncanny resemblance to America’s Statue of Liberty [and the model for the National Endowment for Democracy’s annual Democracy Award] .

“The Tiananmen uprising was bloodily repressed and the ‘Goddess’ was torn down,” he adds. “But Chinese liberals have continued to look to America for inspiration and support.”

The commitment to such abstract principles as freedom and democracy found concrete manifestation in the institutions of the liberal international order.

It has had its fair share of shortcomings, but the peace and prosperity it has engendered are not fictitious, says Stewart M. Patrick, the James H. Binger senior fellow at the Council on Foreign Relations and author of “The Sovereignty Wars: Reconciling America with the World” (Brookings Press: 2018). Ultimately, support for a liberal international order is what distinguishes the United States from the many leading world powers that preceded it, he writes for World Politics Review. 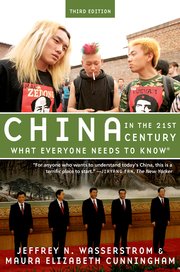 China’s concerted effort to blot out memory of the Tiananmen massacre is not unprecedented, and there are parallels in the handling of an earlier massacre across the Taiwan strait. This one, known as 2/28, took place in 1947 in Taipei, the largest city and capital of Taiwan, according to Seton Hall University’s Margaret K. Lewis, a recent Fulbright Senior Scholar at National Taiwan University, and UC Irvine’s Jeffrey Wasserstrom, coauthor of “China in the 21st Century: What Everyone Needs to Know”.

Even though only one of the massacres can be openly discussed in the place in which it occurred, there are three ways in which thinking about 2/28’s legacy helps put that of 6/4 into perspective, they write for CNN:

“Taiwan’s history does not tell us what will happen in the PRC in the near future, but it does give us reason to hope that policies — including how 6/4 is remembered and discussed — can eventually change,” they suggest.