Senator John McCain “was one of the great freedom fighters of all time,” according to a leading democracy advocate.

“He was a champion of democracy wherever it was being challenged and needed his support,” said Carl Gershman,” President of the National Endowment for Democracy. “His powerful voice gave hope to dissidents and political prisoners everywhere and gave them confidence that they were not alone. As a result, his death is mourned by democrats in Russia and Ukraine, in China and Burma, in Cuba and Venezuela, and in Egypt, Iran, Zimbabwe, and so many other countries.” 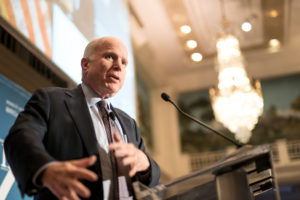 “McCain’s worldview was, properly speaking, patriotic, not nationalistic, in that it was credal, bound up in democratic principles,” notes commentator Jonah Goldberg. The late senator was a staunch advocate of a global community or league of democracies to counter authoritarian threats, he adds.  “It would be a fitting response to both the passing of McCain and the rise of nationalism around the globe if the League of Democracies were given a fresh look,” he writes for The Los Angeles Times.

Curate freedom’s comparative advantage was one of McCain’s rules to live by, adds John Raidt, a nonresident senior fellow in the Atlantic Council’s Scowcroft Center of Strategy and Security, and a former legislative director for Sen. McCain. His friend, the Irish rock star Bono, observed that the United States is not just a place but an idea. McCain agreed, he writes for POLITICO:

Throughout his career, he devoted himself to protecting the idea, including for 25 years as chairman of the International Republican Institute, a component of the National Endowment for Democracy. And as a national political leader, he sought to ensure that the United States remains a just and worthy custodian of the idea. 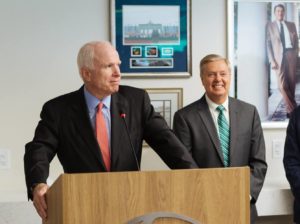 McCain’s policy priorities all intersected in the name of a greater goal: the promotion of Western democratic values in countries where such principles had been routinely ignored or trampled on for decades, even centuries, notes Andrew Desiderio. In the last two years alone, McCain was an authority on human-rights abuses in Iran, the persecution of the Rohingya in Burma, the rule of law in Egypt, anti-corruption efforts in Romania, democracy in Cambodia, and much more, he writes for The Daily Beast.

The Washington think-tank community benefited greatly from McCain’s service over the past few decades, and those groups often aided his crusades, Desiderio adds:

The National Democratic Institute (NDI), which former Secretary of State Madeleine Albright chairs, and the International Republican Institute (IRI), which McCain chaired for 25 years, recently completed a joint election-monitoring mission in Zimbabwe. McCain was invaluable to those organizations as they tried to set up such missions, and McCain himself often joined them.

“Both Senator McCain and Madeleine Albright experienced, on a very personal level, the absence of freedom in their lives—he as a POW in Vietnam and she as a refugee escaping first the Nazis and then the communists in Czechoslovakia,” Kenneth Wollack, the president of NDI, told The Daily Beast. “That shared experience influenced their world view and reinforced the close cooperation between our two institutes.”

Sen. McCain was not selective in his belief that advancing universal values of democracy and human rights served American interests in a more peaceful, stable world, notes IRI chief Daniel Twining. He raged against tyranny in countries such as the Maldives, population 400,000, as virulently as he fulminated against the strongmen in control of authoritarian great powers who had turned their nations into prisons for their people, he writes for Foreign Policy:

He took repression personally: How did Putin get away with conning Russians into believing he was protecting their country from American encirclement even as Moscow invaded neighbors in Georgia and Ukraine in an effort to build a new empire? How did successive North Korean despots charm American presidents into negotiating closer ties when large segments of the North Korean population lived in gulags?

Some of the most poignant and diverse condolences came from southeastern Europe, where the Arizona Republican’s unique brand of personal diplomacy forged bonds with democratic leaders and irritated illiberal regimes, VOA reports. Known for packing Congressional recesses with extensive global travels, McCain used his office to shed light on conflicts underreported by major Western news outlets.

McCain’s moral leadership was captured well during his final meeting with Boris Nemtsov, leader of Russia’s main opposition political party and chief critic of President Vladimir Putin. Only a few months before Nemtsov’s assassination in Moscow, I organized a meeting for McCain and Nemtsov in Vilnius, Lithuania, notes Stephen B. Nix, IRI’s Regional Director for Eurasia. There McCain showed his prescience when he inquired about Nemtsov’s safety due to his steadfast criticism of Putin as a murderer, thug, and KGB agent, he writes for the Atlantic Council:

Nemtsov looked McCain directly in the eye, smiled and said, “You know, Senator, Putin really hates you.” This drew a smile from the senator. “Do you know why he hates you, Senator?” Nemtsov asked and paused. “It’s because he’s afraid of you. And the reason he’s afraid of you is that he knows that deep down, you will always stand by your principles. That frightens him, because unlike you, he is a man without principles.”

Russian media reported McCain’s death as the passing of “an implacable enemy of Russia.” Nothing could be further from the truth, says Vladimir Kara-Murza, vice chairman of the Open Russia movement and chairman of the Boris Nemtsov Foundation for Freedom. He certainly was an enemy of those who have turned Russia into an autocracy (and looting ground) at home, and into an instrument of aggression abroad, he writes for The Washington Post:

“[These] people . . . are the enemies of the Russian people. They rob Russia of its wealth, its hopes, its future. They deny the God-given dignity of the people they misrule. They are thieves and murderers. And they are cowards. They fear justice. They fear truth. They fear a society in which ideals and morality are the foundation of law and order.” These were the words of John McCain at a 2015 award ceremony in Washington. The award was posthumous; it was given to Russian opposition leader Boris Nemtsov “for his courage, for giving the last full measure of devotion to his country and his countrymen.”

McCain also carried forward the Reagan legacy on national security policy more than almost any other U.S. political leader, Will Inboden writes for Foreign Policy. Like Reagan, McCain was a stalwart advocate for human rights and democracy, exemplified by his longtime chairmanship of the International Republican Institute. Like Reagan, McCain stood for a strong military, free trade, loyalty to our allies, and U.S. international leadership.

His departure leaves a void of congressional leadership, of national-security thought, and of moral direction, writes Richard Fontaine, the president of the Center for a New American Security. He served as a foreign-policy adviser to Senator John McCain from 2004 to 2009.

McCain’s legacy includes the namesake McCain Institute for International Leadership, a nonprofit and nonpartisan education and research center based in Washington, D.C., Arizona State University adds. The center was launched in 2012 with a $9 million gift from the McCain Institute Foundation. In 2017 it hosted 20 events on human trafficking, international security, and leadership, and partnered with 31 organizations in the U.S. and around the world.

As Max Boot notes, John McCain was an easy Presidential candidate to support as a foreign policy advisor. In 2008 I represented the campaign in a series of proxy debates organized by think tanks and the press, adds Michael Green. The Obama team would always come armed with thick books looking like litigators in a complex anti-trust case, he writes for Foreign Policy:

While I had a lot of respect and admiration for the guys on the other side of the table, it was clear that their talking points were designed to avoid alienating key Democratic constituencies as much as they were to articulate a clear foreign policy strategy. Team McCain came armed only with an understanding of our candidates’ vision, principles and record. Our counterparts later joked that our clarity on human rights, alliances or trade probably didn’t move any voters in swing states like Florida, but there was no doubt we had much more fun.

“He was one of the most important, substantive leaders for foreign policy on the Republican side in the Senate,” said Kurt Volker, (above), a former State Department official who met McCain in the late 1990s.

“He doesn’t look back,” said Volker, who runs Arizona State University’s McCain Institute for International Leadership. “What I got from that is just go do what you think you should do. Have courage and don’t worry about things,” he told Stars and Stripes.

McCain was also a great and decades-long friend of the NED, chairing IRI for more than a quarter of a century and leading the effort to build support in the U.S. Congress for NED’s mission and work, the NED’s Gershman adds.

“He was a proud American, and he made countless others proud to be American.   As we mourn his death, we pledge to continue the fight for freedom to which he devoted his life.”