A coalition of 37 human rights and civil society groups today sent a letter to U.S. Customs and Border Protection urging Acting Commissioner Morgan to issue a Withhold Release Order (“WRO”) which would ban the import of all Chinese cotton, textile, and apparel products tainted by forced labor. 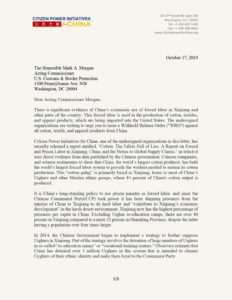 It is China’s long-standing policy to use prison inmates as forced labor, and since the Chinese Communist Party (CCP) took power it has been shipping prisoners from the interior of China to Xinjiang to do hard labor and “contribute to Xinjiang’s economic development” in the harsh desert environment, the letter (right) stated. Xinjiang now has the highest percentage of prisoners per capita in China. Excluding Uighur re-education camps, there are over 80 prisons in Xinjiang compared to a mere 25 prisons in Shandong Province, despite the latter having a population over four times larger.

China’s Muslim Uighurs face systematic oppression from their own government. Their home province of Xinjiang has been turned into a police state—an estimated one million of them are detained in camps, The Economist (above) observes.

Forced labor, mass internment, and social control in the Xinjiang Uyghur Autonomous Region (XUAR) were the subject of today’s Congressional-Executive Commission on China (CECC) hearing. Witnesses provided testimony on forced labor and other egregious human rights abuses, examined how products made in the XUAR’s forced labor camps have entered global supply chains, and provided recommendations to the U.S. Administration and Congress. The hearing can be viewed on the CECC’s YouTube page.

Adrian Zenz: Non-resident Senior Fellow in China Studies at the Victims of Communism Memorial Foundation and author of “Beyond the Camps: Beijing’s Grand Scheme of Forced Labor, Poverty Alleviation and Social Control in Xinjiang.”

Nury Turkel: Washington-based attorney and Chair of the Board for the Uyghur Human Rights Project, a partner of the National Endowment for Democracy, which he co-founded in 2004.

Michael Posner: Jerome Kohlberg Professor of Ethics and Finance and the Director of the Center for Business and Human Rights at NYU’s Stern School of Business and former Assistant Secretary of State for Democracy, Human Rights, and Labor.

Amy Lehr: Director of the Human Rights Initiative (HRI) at the Center for Strategic and International Studies (CSIS) and former legal adviser to UN Special Representative on business and human rights.