For the Future of Montenegro and its allies from the centre-right alliance Peace is Our Nation, and a group led by the green URA party, jointly secured a slim majority of 41 deputies in the 81-seat parliament in an election on Aug. 30. … After meeting the leaders of the proposed coalition, President Milo Djukanovic said he would forward Krivokapic’s name to parliament. Djukanovic, who faces reelection in 2023, said the new government would maintain reforms and investments in the tiny Adriatic republic of only 620,000, a NATO member and a candidate to join the European Union. 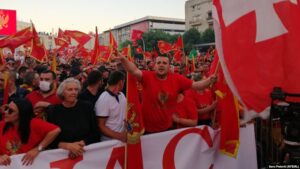 For The Future Of Montenegro, which seeks closer ties with Serbia and Russia and is backed by the Serbian Orthodox Church, won 32 percent of the vote in the recent elections, RFE/RL adds. The alliance is led by the pro-Serb Democratic Front (DF).

Moscow had high hopes for Montenegro’s parliamentary elections and a possible victory for opposition forces, notes analyst Grigorij Mesežnikov. a former NED Reagan-Fascell fellow and contributor to the Journal of Democracy. Foreign Minister Sergey Lavrov said: “Good relations between Russia and Montenegro will be restored and the temporary holders of power pursuing a Russophobic policy in Montenegro will leave.”

The media in Moscow presented representatives of the Montenegrin opposition parties as potentially transformative for the country, he writes for Visegrad Insight. In particular, they provided airtime to politicians – such as Milan Kneževič, pro-Russian leader of the Democratic People’s Party – who argued that if a new parliamentary majority was formed, dominated by parties advocating military neutrality, the new government could reconsider the “illegal decision” of joining NATO.

The international media watchdog Reporters Without Borders said it was black day for press freedom, adding that Martinovic had been convicted despite a clear lack of evidence. “RSF will continue supporting the journalist. This Kafkaesque judicial prosecution lasting five years has to come to an end,” it said.

Western diplomats and officials have been willing to turn a blind eye to the fact that Djukanovic was one of the early adopters of the corrupt and autocratic state model with touches of democracy that has since become so popular, long before Hungary’s Viktor Orban, Poland’s Jaroslav Kaczynski, Bulgaria’s Boiko Borisov and Serbia’s Aleksandar Vucic, Deutsche-Welle reports:

Over the years, Djukanovic’s family and a clique of allies have amassed enormous wealth by appropriating public assets in Montenegro, which has been holding accession talks to join the EU since 2012. Illegal financing of parties, election fraud and abuse of power are standard in the country, not to speak of lesser corruption, smuggling and money-laundering affairs.

Djukanovic’s visit to Berlin on Wednesday can be perceived as an example of turning a blind eye again. He was scheduled to speak with members of the German parliament’s committee on European affairs. but more importantly, he was invited to official talks with his German counterpart, Frank-Walter Steinmeier. This is surprising to say the least, at a time when many such events have been taking place by video link because of the global COVID-19 pandemic. Montenegro’s rate of infection is one of the highest in Europe. 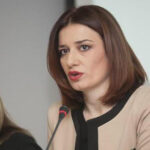 “Democracy in Montenegro has been declining for many years, without the will to stop this downward trend,” said Jovana Marović (right), a member of the Balkans in Europe Policy Advisory Group (BiEPAG) and Executive Director of Politikon, an independent think-tank.

But civil society has been clear and vocal in pointing out undemocratic practices and abuses, she added with respect to the latest European Commission Progress Report on Montenegro. “All it needs to do in the future is to continue to influence the democratization of the country with the same commitment, non-selective approach and impartial analysis”, she said.

As Montenegro forms its next government, it faces serious political, social and economic challenges. It is vital that parties across the political spectrum unite around the broad goals of reducing interethnic tensions and introducing political reforms to put Montenegro back on the path to democracy, according to the International Republican Institute’s Randolph Kent.

Opposition leaders, democracy and human rights watchdogs, have long accused Djukanovic and his Democratic Party of Socialists (DPS) of running Montenegro as their own corrupt fiefdom with links to organised crime, Reuters adds.

in the video above, Damon Wilson, Executive Vice President at the Atlantic Council, Valerie Hopkins, South-East Europe Correspondent at Financial Times, and Paul McCarthy, Europe Regional Director at the International Republican Institute, discuss the results of the August 30 parliamentary and local elections, and what this tells us about Montenegro’s current political dynamics as well as the country’s future outlook as a stable democratic member of the Euro-Atlantic community.