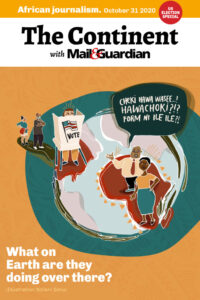 In Africa and much of the global South, the spread of rumors, hoaxes, and calculated “fake news” primarily happens on WhatsApp, whose closed network and low data costs are good for keeping in touch with family, friends, and colleagues away from lurking eyes of random acquaintances, notes Christine Mungai, curator of Baraza Media Lab in Nairobi, Kenya. But that intertwining of personal relationships and impenetrability is also the reason that Facebook-owned WhatsApp is the perfect platform for the lightning-fast spread of dangerous misinformation, she writes for Harvard’s Niemann Lab:

In April 2020, a group of journalists with Adamela Trust — the nonprofit arm of the South African newspaper Mail & Guardian — decided to make a gamble and publish a weekly newspaper – The Continent – that could bring high-quality, reliable and fact-checked information to audiences via chat apps….. Perhaps the most impactful reporting was around Covid-19 in Tanzania, a country whose president John Magufuli was a prominent Covid denialist who refused to acknowledge the presence of the disease in the country, even as The Continent’s reporting showed hospitals filled with patients battling “acute pneumonia,” as officials called it.

You can subscribe by emailing “subscribe” to TheContinent@mg.co.za, or by sending a message to The Continent on WhatsApp or Signal at +27 73 805 6068. Editions are sent out as a PDF on Fridays. RTWT

The Continent was initially funded by the Adamela Trust, but it has since attracted funding from the Konrad Adenauer Stiftung, the National Endowment for Democracy (NED), Internews, the Mott Foundation and Africa No Filter.