The US ended visa restrictions imposed on eleven individuals complicit in human rights abuses due to “the changed circumstances in Burundi and President Ndayishimiye’s pursuit of reforms across multiple sectors over the past year,” said US Secretary of State Antony Blinken.

Exiled Burundian lawyer and human rights defender Armel Niyongere (above) had called on the international community and France not to resume cooperation with Burundi, where he said human rights are not respected. “Since Evariste Ndayishimiye, the new president elected in June 2020, took power, there has been a continuous regression: many cases of forced disappearances, torture, assassinations,” he told AFP. 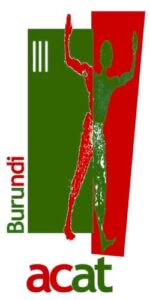 On November 18, Niyongere received the prestigious Engel-Du Tertre prize for his commitment to human rights on behalf of the Association of Christians for the Abolition of Torture (ACAT – a partner of the National Endowment for Democracy – NED).

The lifting of sanctions appears to be especially ill-timed when Burundi’s commitment to human rights seems to be unravelling, according to a recent report from the Burundi Human Rights Initiative.

Following a series of armed attacks, dozens of political opponents have been arbitrarily arrested on accusations of collaborating with armed groups. Some were detained incommunicado and tortured at the intelligence headquarters in Bujumbura. The number of enforced disappearances has also increased sharply, notes the report, “Behind the gate: a rise in torture and disappearances.”  BHRI documents developments since April 2021, including the violent record of Moïse Arakaza, police commissioner of Mugamba, Bururi province.

Human Rights Watch called recently for the immediate release of Tony Germain Nkina, a lawyer who was arbitrarily imprisoned on sham charges, most likely due to his affiliation with with Association for the Protection of Human Rights and Detained Persons (Association pour la protection des droits humains et des personnes détenues, APRODH), one of Burundi’s leading human rights groups.