As G20 leaders arrive in Bali for the summit, Transparency International has been blocked from displaying a billboard with a simple message: “G20, #StopKleptocrats”.

The G20 has largely ignored kleptocracy and the large-scale cross-border corruption that have fueled the current crises, TI reports. While many Western economies, including those that make up the G7, have begun to implement long overdue anti-money laundering reforms, these efforts still leave gaps – both in the measures taken by such countries and because their actions alone cannot end the flow of dirty money around the world. 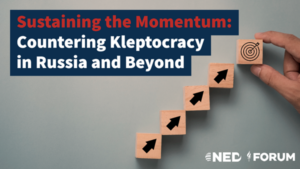 Empowering civil society and journalists to combat corruption is the focus of a new cooperative project between RUSI’s Centre for Financial Crime and Security Studies (CFCS) and the National Endowment for Democracy (NED). The new grant supports three complementary workstreams: the continuation of a project titled ‘Restricting Kleptocracy: Strengthening Monitoring and Accountability in the First Mile’, and two new initiatives entitled ‘Countering Authoritarian Abuses of the FATF Standards’ and ‘The European Sanctions and Illicit Finance Monitoring and Analysis Network’ (SIFMANet), RUSI reports:

The first phase of the Restricting Kleptocracy project engaged civil society and investigative journalists in Latin America, East Africa and the Western Balkans with workshops on anti-financial crime standards. The discussions unveiled several areas that could further support grassroots communities in holding kleptocrats and corrupt actors in their countries to account. The project will continue with a deeper focus on developing understanding of beneficial ownership transparency and asset recovery mechanisms, and how this knowledge can be useful for investigative and advocacy work. It will also aim to expand knowledge of the interpretation of FATF evaluation reports and country lists. RTWT

The NED, Freedom House and the Bush Center actively work to support the cause of freedom, from providing emergency assistance to activists and supporting free and fair elections to making it easier for citizens to access independent information and helping expose the corruption of kleptocratic regimes, Michael Abramowitz, David Kramer and Damon Wilson write for the Dallas Morning News.

Such activists, experts, and leaders will gather at the Bush Institute (see below) to assess threats to freedom and offer recommendations on ways to advance the cause of liberty. Topics to be examined include the global struggle for freedom, pushing back against the authoritarian threat, the impact of emerging technologies, and how the U.S. can help support democracy and human rights abroad.

The George W. Bush Institute hosts a conference on The Struggle for Freedom in Dallas, Texas, on Wednesday, November 16 in partnership with Freedom House and the National Endowment for Democracy.