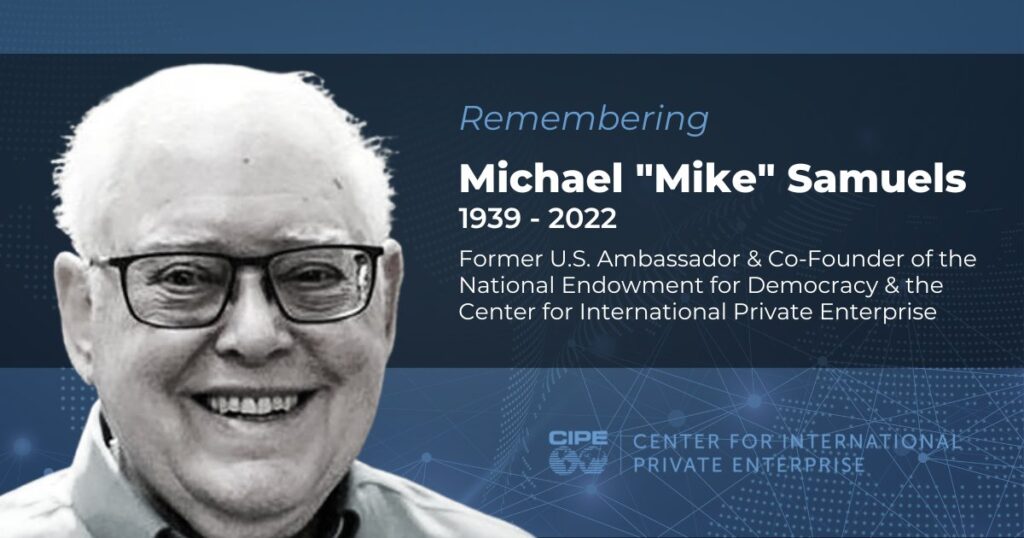 Michael Anthony Samuels, a two-time U.S. Ambassador and pillar of the African policy and trade policy communities, passed away unexpectedly but peacefully the evening of August 8, 2022, of a likely cardiac event. He was 83, The Washington Post reports:

Michael started the Africa Program at the Center for Strategic and International Studies and later became the Executive Director for what was then known as Third World Studies at CSIS. From there, he became the Vice President-International at the United States Chamber of Commerce [and] was directly involved in the efforts that culminated in the creation of the National Endowment for Democracy (NED), and he served as founder and chief executive officer of the Center for International Private Enterprise (CIPE). These were two of his most treasured achievements.

The National Endowment for Democracy is “such a worthwhile, important initiative that I’m tempted to ask: Why hasn’t it been done before?” President Reagan said at its inauguration. “Well, we’re doing it now, and it’s largely because of the hard work of good people. Chuck Manatt, Frank Fahrenkopf, Dante Fascell, Bill Brock, Lane Kirkland, Mike Samuels.”

“We are living Mike’s legacy,” said CIPE Executive Director Andrew Wilson. “He helped shape early thinking about CIPE’s unique mission and programs that put local partners first as part of our mission to support the linkages between economics and democracy. We are deeply saddened about Mike’s passing and express our condolences to the Samuels family.”

Samuels had a long career in public service, including many key posts with the U.S. government and other prominent organizations in the 1970s and 1980s, CIPE adds. Among them: U.S. Ambassador to Sierra Leone and Deputy United States Trade Representative and U.S. Ambassador to the General Agreements on Tariffs and Trade (GATT).

“Mike Samuels was the principal representative of the Chamber of Commerce in the process of creating the National Endowment for Democracy (NED) and for that reason has always been considered one of the key founders of the NED,” said former NED President Carl Gershman. “But he was also a major policy advocate making the case to the broader policy and political community for the creation of a new institution for the worldwide promotion of democratic political development, free market economies, and American values.”