Activists monitoring Iran’s protests are increasingly covering executions and arrests rather than street demonstrations, a sign of how momentum in the unrest has shifted to the state and its crackdown, Bloomberg reports:

Mentions of “protests”, “street” and “gathering” in December fell to the lowest level since the protests began in September, according to data compiled by Bloomberg from Persian tweets by Norway-based Iran Human Rights, Hengaw Organization for Human Rights and activist accounts. Words classified as indicative of street protests include “protest”, “demonstration”, “gathering” and “street.” Mentions of “execution”, “prison”, “arrest”, “court” and “sentenced” almost doubled in the same period.

Iranian Supreme Leader Ayatollah Ali Khamenei has called for a tough response to the months-long protests sparked by the death in custody of Mahsa Amini, accusing street demonstrators who set fire to trash cans of “treason without any doubt” and calling on “the responsible bodies to deal with treason seriously and justly,” Farda Briefing’s Golnaz Esfandiari reports.

The success of the Iranian regime’s crackdown on the worst political turmoil in years is likely to reinforce a view among Iran’s hardline rulers that suppression of dissent is the way to keep power, Reuters adds:

The achievement may prove shortlived, however, according analysts and experts who spoke to Reuters. They argue the resort to deadly state violence is merely pushing dissent underground, while deepening anger felt by ordinary Iranians about the clerical establishment that has ruled them for four decades.

“It has been relatively successful since the number of people on the streets has decreased,” said Saeid Golkar of the University of Tennessee at Chattanooga, referring to the crackdown and executions. “However, it has created a massive resentment among Iranians.” 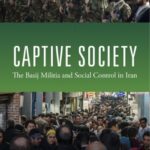 “The regime’s primary strategy has always been victory through terrorizing. Suppression is the regime’s only solution since it is incompetent and incapable of change or good governance,” said Golkar, the author of Captive Society: The Basij Militia and Social Control in Iran.

The Basij forces, affiliated with the elite Revolutionary Guards, have been at the forefront of the state clampdown on the unrest sparked by the death of 22-year-old Mahsa Amini while in the custody of Iran’s so-called ‘morality police’ on Sept. 16, according to reports (above).

Islamic Republic has sentenced 35-year-old protester #JavadRouhi to death on charges of apostasy and insulting the Koran, @hra_news reported. pic.twitter.com/9GPSgsRRHU

Alex Vatanka, director of the Iran Program at the Middle East Institute in Washington, agreed that Tehran was banking on repression and violence as its way out of this crisis.

“This might work in the short term but … it won’t work in the long term,” Vatanka said, citing reasons such as Iran’s deteriorating economy and its fearless young population who want “big political change, and they will fight for it.”

A bipartisan pressure campaign could undermine the regime by strengthening the pro-democracy forces in Iran. It should target the regime’s soft underbelly: its massive corruption and human rights abuses, especially against women, says a new report from the Foundation for the Defense of Democracies (FDD).

📄 @FDD Strategy: The Foundation for Defense of Democracies has published a plan with 231 recommendations for American policymakers and allies to support the Iranian people and confront the ongoing threats from Iran. @J_Insider https://t.co/Eqn82XxuQn

VOA Persian journalists report on how Iranians mobilize on social media and in real life to try to save jailed protesters from execution (above).

Other observers believe Iran’s Islamic clerical regime is divided in its response to months of unprecedented protests, wavering between repression and what it views as conciliatory gestures trying to quell the discontent, AFP reports.

“The conflicting messages we are getting from the Iranian regime suggest an internal debate on how to deal with ongoing protests,” said Nader Hashemi, director of the Center for Middle East Studies at the University of Denver. “In most authoritarian regimes, there are hawks and doves” who disagree on how repressive the state should be during crises.” 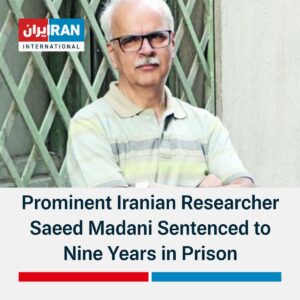 According to the Oslo-based NGO Iran Human Rights, at least 62 journalists are currently behind bars, DW News reports. Milad Alavi, who works for Tehran’s daily paper Shargh, is now in the same prison as the well-known sociologist Saeed Madani. In late December, his paper had reported that Madani had received multiple visits from high-ranking officials of an unnamed ministry in prison.

“They were asking him for advice on how to end the uprising across the country,” said his lawyer, Mahmoud Behzadirad. Madani is said to have suggested ending the violence and taking protesters’ rights into consideration.

The distribution of Madani’s books was prohibited last summer, after the University of Tehran professor was arrested in May 2022. Back then, he had warned about inflation and scarce food supplies, stating that “these protests must be taken seriously, because they are directed against the entire political system, and they are recurrent.” Madani has been arrested several times in the past 13 years. In his books, he makes a case for solidarity within civil society and for the courage to stand up for one’s convictions.