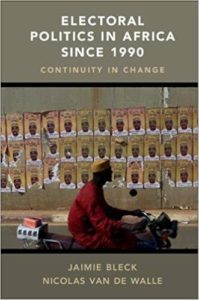 A wave of democratization swept over the African continent in the 1990s. Has it made a difference in the welfare of individuals in sub-Saharan African nations? And why hasn’t the shift to multiparty elections led to profound change in African governance, given the region’s rapidly changing economics and urbanization? Linda B. Glaser asks in The Cornell Chronicle.

They describe a continent with a “paradoxical combination of change and continuity” in which almost all of the region’s 49 countries have institutionalized multiparty electoral politics, yet none are in the process of consolidating democracy. The authors examined more than 500 national elections in Africa since 1990 “to demystify and normalize African elections with the tools and analytical categories of comparative politics.”

The challenges facing Zimbabwe’s fragile democracy are all too evident in the violent crackdown on peaceful protests organized by the Zimbabwe Congress of Trade Unions (ZCTU) and the arrest and detention of ZCTU leaders and activists on October 11, 2018, which has drawn condemnation from the American Federation of Labor and Congress of Industrial Organizations (AFL-CIO).

“We were alarmed to receive news that ZCTU President, Peter Mutasa, Secretary General, Japhet Moyo and 39 other trade union activists were arrested and physically assaulted in Harare, Mutare and Masvingo after duly informing authorities of their intention to hold a demonstration against economic hardships and deliver a petition of workers’ demands to the Minister of Finance,” wrote AFL-CIO International Affairs Officer Cathy Feingold. “We were also disheartened to learn that police held 26 people, including ZCTU staff members in detention in the ZCTU offices in Harare, in an apparent lock down, prevented from freely leaving the premises.”

“This is unacceptable. It violates the foundations of democratic societies: freedom of association, assembly and speech. The global labor movement and anyone who cares about worker and human rights are rightly outraged,” said Hanad Mohamud, Africa Regional Program Director for the Solidarity Center, a core institute of the National Endowment for Democracy.

Confusion, repression, and misdirection seem to be the distinguishing characteristics of Zimbabwe’s “new dispensation,” and they contribute to citizens’ fundamental lack of confidence in government, notes Council on Foreign Relations analyst Michelle D. Gavin. The recent elections were supposed to bolster the legitimacy of the government and give Zimbabwe a solid new basis on which to move forward. But little seems solid and reliable in this new era – including, as the European Union recently noted, the election results themselves.

Elections offer the possibility of significant political change, de Walle and Bleck note, but democracies and elections are influenced by numerous variables, including socioeconomic factors and the international environment, Glaser adds:

Nor are the changes resulting from electoral moments necessarily positive, they note. During the period they researched, electoral politics have been institutionalized with relatively little democratic deepening. The authors argue there is a “striking and paradoxical disjuncture between the great changes in African society and the relative stagnation in its politics,” and their finding that holding regular multiparty elections does not necessarily promote the stability or deepening of democracy should prompt a reconsideration of theories about democratic consolidation, they said.

“Politicians and political parties seem stuck in the old ways of doing things, even as African civil society and media are changing really fast and popular expectations are rising for a different kind of politics,” said van de Walle. RTWT