Have our moral nerve endings been deadened as a result of widespread immunity for human rights abusers?

Human rights barrister Amal Clooney has told Australian MPs they have a role to play in ensuring authoritarian governments and individuals do not use the cover of the coronavirus crisis to permanently erode civil liberties and conceal abuses. The parliament is considering the introduction of a Magnitsky Act, which would allow for the use of targeted sanctions against human rights violators around the world, the Guardian reports:

Similar laws in the US and UK are named for Sergei Magnitsky (right), who in 2008 uncovered a $230m fraud committed by Russian government officials. Magnitsky testified against the officials and was arrested, tortured and died in jail. He was then put on trial posthumously. Clooney is a strong advocate for such laws, which she says are among the most effective tools in curbing global abuses of human rights. She says Australia would be among the most effective jurisdictions to use such laws, given its position of influence in the Asia-Pacific region.

Clooney said Australia should target companies linked to human rights violations, including in the Chinese government’s use of internment camps in the western province of Xinjiang where an estimated 1.5 million Uighur Muslims are being forcibly detained, the Sydney Morning Herald adds.

“The current health crisis has only served to exacerbate what was an existing human rights crisis,” Clooney told the joint standing committee on foreign affairs, defence and trade. 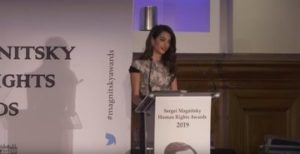 “It seems at times that there is so much bad news in the world that our moral nerve endings have been deadened – meaning abuses will thrive and impunity will remain the norm. Abuses of [power] thrive when no one is watching,” she added. RTWT

Clooney served on the Independent High-Level Panel of Legal Experts on Media Freedom which recently launched (above) a landmark a Report on the use of Targeted Sanctions to Protect Journalists, advocating the global adoption and rapid implementation of targeted “Magnitsky” sanctions. Former Canadian Attorney General Irwin Cotler of the Raoul Wallenberg Centre for Human Rights (RWCHR) served as a distinguished member of the Panel.

The Magnitsky case and the sanctions that imposed on human rights abusers as a result of the act passed in his name “put a sorely-needed spotlight on Russia’s dangerous kleptocratic regime,” National Endowment for Democracy (NED) President Carl Gershman told a US Senate Foreign Relations Committee hearing on Corruption: Violent Extremism, Kleptocracy, and the Dangers of Failing Governance. “The Magnitsky Act holds such abusers to account in ways that beleaguered Russian institutions cannot, given the thorough removal of checks on power by the Putin regime,” he added.

Join the Kennan Institute for a Facebook Live featuring a conversation between Andrea Kendall-Taylor and William Pomeranz on what defines Russian authoritarianism and how it affects Russia’s foreign policy and relations with the West.