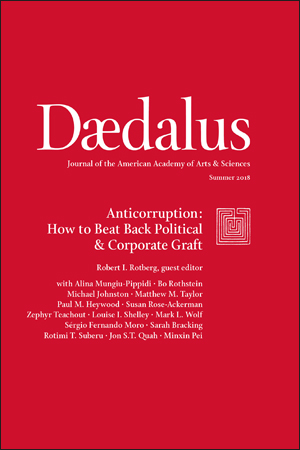 A universal asset in efforts to combat kleptocracy and corruption is the fact that “the anti-corruption ideal is common to all nations, all traditional cultures,” according to Robert I. Rotberg of Harvard’s Kennedy School, writing as guest editor of the Summer 2018 issue of Dædalus: “Anticorruption: How to Beat Back Political & Corporate Graft.”

Corruption is not new, but its persistence and pervasiveness has made it a pressing social problem, he writes in Accomplishing Anticorruption: Propositions & Methods:

Corruption costs billions in global GDP, erodes quality of governance, and impacts the health and well-being of individuals all over the world. It is also difficult to solve: most countries have failed to move the needle on corruption over the last few decades. But the effort is well-informed, with a great deal of research on how countries have successfully beaten back corruption, including by establishing anticorruption agencies, increasing transparency, and creating merit-based bureaucracies.

Rotberg calls for innovative approaches, such as using automated technology to conduct routine bureaucratic interactions, Dædalus adds. Although corruption is a tenacious problem, there is much reason for optimism as leaders, policy experts, and civil societies continue to refine best practices

From the perspective of international development agencies, aid conditioned on good governance seemed like a potentially useful component of the anticorruption “toolkit,” says Alina Mungiu-Pippidi of the Berlin-based Hertie School of Governance. However, as recent decades have shown, most of the top recipients of conditional international aid have not shown any progress on indicators of corruption, she contends.

Given this disappointing fact, she rethinks international development’s standard tools for reducing corruption in Seven Steps to Control of Corruption: The Road Map. A former Reagan-Fascell fellow at the National Endowment for Democracy, Mungiu-Pippidi’s new road map for establishing standards of “ethical universalism” in governance includes diagnosing the norm of resource allocation in a country and accordingly identifying the human agency with the most to gain from spearheading anticorruption efforts, Dædalus adds.

Getting to Accountability: A Framework for Planning & Implementing Anticorruption Strategies by Matthew M. Taylor (American University) 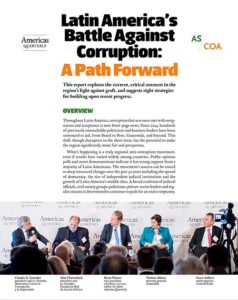 Corruption & State Capture: What Can Citizens Do? by Sarah Bracking (King’s College London)

How Not to Fight Corruption: Lessons from China by Minxin Pei (Claremont McKenna College)