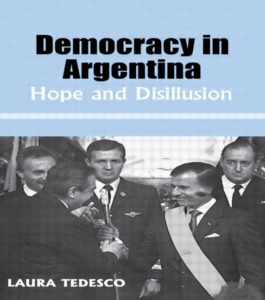 Argentina’s president, Alberto Fernández, and the country he leads are entering a dangerous new phase, the Economist reports. Pressure to ease the lockdown is building before the pandemic has peaked. And the government has begun a gambit to support the economy that may end up weakening it further. Success would be the making of his presidency and brighten the future of his Peronist political movement. Failure could be disastrous for both.

“Will he be the creator of a new political hegemony, or author of social chaos if he generates economic havoc?” asked Jorge Fontevecchia, a media mogul, in a newspaper column.

The country’s democracy may be heading for another round of what Laura Tedesco called the cycle of hope and disillusion (above).

Out of power and with promises to jump-start a lagging economy, the fractured Peronists reunified and reclaimed the presidency. Now they must deliver what voters want, argue María Victoria Murillo, director of Columbia University’s Institute of Latin American Studies, and S.J. Rodrigo Zarazaga,  director of the Center for Research and Social Action (CIAS) and researcher at the National Scientific and Technical Research Council (CONICET) in Buenos Aires.

In October 2019, Argentina’s incumbent president Mauricio Macri was defeated by Fernández, the candidate of a Peronist coalition. Macri’s 2015 victory was hailed at the time as the onset of a right-wing regional wave, but his 2019 defeat shows that the period to follow was in fact one of higher electoral competition and presidential turnover. The new administration inherited a dire economic situation to be managed by a coalition with different fiscal priorities and no institutional mechanisms for adjudication, they write in Argentina: Peronism Returns, an article for the Journal of Democracy:

Argentina’s ability to achieve a peaceful turnover of power amid regional unrest and deep political polarization at home is good news, but it should not hide the challenges ahead. Argentines went to the polls to bring about the change they wanted, but if their expectations remain unmet their patience may wear out. Argentine democracy has shown a heartening sign of maturity at a difficult time in the region, but political stability will depend on economic outcomes and the public’s perception.