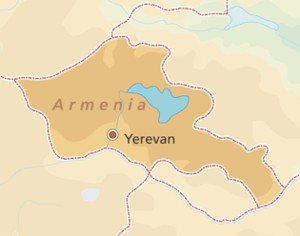 Armenia plans to change its system of governance in a bid to improve democracy — but critics claim it’s all smoke and mirrors. In early April, just as Yerevan prepares to ratify a landmark agreement with the European Union, the small Caucasus nation will complete its shift from an executive presidency to a parliamentary system — the exact opposite of its neighbor Turkey, analyst Zia Weise writes for POLITICO:

Armenia’s ruling party touts this as a step toward true democracy — in line with the EU agreement’s demands for political reform. But government critics say Armenia’s system change is not so different from Turkey’s: The transition, they argue, is designed to enable outgoing President Serzh Sargsyan to maintain his grip on power.

Transitioning to parliamentary rule was not necessarily a bad move, said Anahit Shirinyan, an Armenian analyst with Chatham House. “But what matters is the Armenian political context,” she said. “There are suspicions that this will enable the ruling party to consolidate its power. That party has been turning Armenia into more of a one-party system over the last decade — this is the danger.”

Geopolitical trends in the region, notably a Russian-Turkish rapprochement and closer Azerbaijan-Russia relations, have prompted Armenia to seek support from the European Union and the United States, said Miriam Lanskoy, senior director for Russia and Eurasia at the National Endowment for Democracy.