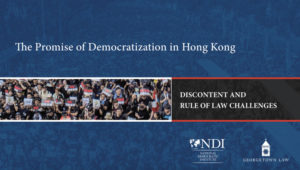 China will impose sanctions on four people with links to U.S. democracy promotion efforts, it said on Monday, over what it called interference in the Asian financial hub of Hong Kong, following U.S. strictures on four Chinese individuals, Reuters reports:

Relations between the two nations have deteriorated to their worst in decades during outgoing U.S. President Donald Trump’s four-year term, with disputes simmering over issues from trade and technology to Hong Kong and the coronavirus.  China’s foreign ministry identified the four as John Knaus, senior director of the National Endowment for Democracy (NED); Manpreet Anand, a regional director of the National Democratic Institute (NDI); Kelvin Sit, the NDI’s program director for Hong Kong and Crystal Rosario, a specialist at the NDI.

The NED and its president Carl Gershman were the target of similar action by Beijing’s Ministry of Foreign Affairs (MFA) in August 2020, which had no impact on NED operations or our support for those who seek to advance democratic values in China, the endowment observed.

“The MFA’s announcement of sanctions against a NED employee will have no effect on NED efforts to provide assistance and solidarity to those working for freedom and human rights in China,” said NED spokeswoman Jane Riley Jacobsen.

In addition to imposing the national security law, Communist Party officials and state newspapers in the city are pushing for still more control, the Times adds:

In a continuing series, Ta Kung Pao, a newspaper owned by the Chinese government’s liaison office in Hong Kong, has demanded that judges be patriotic. It has called for establishing a council to set the length of sentences, an external panel to handle complaints about judges and greater scrutiny over the judicial selection process.

“Beijing understands that this is an area that people will be very sensitive to and the international community will be watching over,” said Eric Cheung, a legal scholar at the University of Hong Kong. “Beijing may not want to be seen as interfering with judicial independence, but I think it is very clear some Beijing officials are not happy with some decisions made by our judges.”

Five months after Beijing began implementing the controversial national security law in Hong Kong, the city that was once known for its high level of autonomy and freedom is now rapidly becoming less different from other cities in China, Deutsche Welle reports:

On November 11, four pro-democracy legislators were disqualified after the highest legislative body in China passed a measure barring anyone from Hong Kong’s legislative council who supports independence, refuses to recognize Beijing’s sovereignty over Hong Kong, seeks help from “foreign countries or foreign forces to interfere in the affairs of the region,” or commits “other acts that endanger national security.”

Jeffrey Ngo, a former member of the now-disbanded pro-democracy organization Demosisto, believes that the resignation of the pro-democracy legislators is inevitable. “Beijing is moving its goalposts all the time, and we have reached a point where even the most moderate members of the opposition camp are disqualified,” Ngo told DW.

“Previously, some traditional pan-democrats would still have illusions that if they don’t cross Beijing’s line, they would be fine,” Ngo explained. “However, Beijing’s line just keeps shifting so it’s inevitable yet tragic [that all members of the opposition camp had to resign].”

Hong Kong’s Courts Are Still Independent. Some Want to Rein Them In. https://t.co/cLUeAMxMqu