Democracy’s global travails continue to mount, notes a leading observer. What looked as recently as a decade ago to be real democratic progress in countries as diverse as Brazil, Hungary, South Africa, and Turkey has been either reversed by illiberal strongmen or unsettled by revelations of systemic corruption, says the Carnegie Endowment’s Thomas Carothers.

Some of the most stirring recent political openings, such as those in Egypt and Myanmar, have slammed shut. The United States and several long-standing democracies in western Europe are struggling with serious democratic challenges, especially the rise of illiberal populist forces. And the two most significant nondemocratic powers, China and Russia, are strutting on the global stage, he writes for Foreign Affairs. in a must-read review

of Sheri Berman’s Democracy and Dictatorship in Europe.

The authoritarian challenge will not disappear anytime soon. How America should respond is the defining question of our time, argues Hal Brands, co-author of Grand Strategy for a New Twilight Struggle.

There is a powerful synergy between strengthening autocracy at home and weakening democracy abroad, he writes in a new analysis for the Center for a New American Security:

The tools Putin used to interfere in America’s 2016 elections were the same tools he initially developed to bolster his domestic authority. In the future, the rise of deepfakes, synthetic media, and other fruits of artificial intelligence will give China and Russia still greater ability to poison democratic political systems, as intensifying competition gives them still greater incentive to do so. The more fragmented and demoralized the “free world” is, the easier it will be for the authoritarian powers to achieve their objectives.

“The democratic decay and surging illiberalism in key parts of the world – including Europe and America – offer fertile ground for this sort of political warfare,” Brands adds.

China is radically expanding its strategy to wield influence in the domestic politics of other countries. This information campaign is designed partly to bolster China’s power but also to undermine the space for rights and democracy in other states, and to potentially support pro-China authoritarian leaders, says the Carnegie Council.

If China were to lead become a global hegemon, democracy would be hard-pressed to remain the mainstream form of political regime it has been for the last century, analyst David Batashvili writes for The National Interest.

America’s most potent weapon in its emerging contest for supremacy with China is not its economy, nor its aircraft carriers, but its ideas. The notion that abstract principles like “freedom” and “democracy” are powerful American assets is sometimes dismissed as liberal wishful-thinking. But Chinese actions suggest otherwise, the FT’s Gideon Rachman writes.

Should the Communist Party step back from the economy, their thinking goes, it might have to loosen its tight grip over the rest of society, too, The New York Times reports.

“The various demands by the U.S. government could force us to carry on with the reforms,” said Tao Jingzhou, a partner at the law firm Dechert’s Beijing office. “There’s a Chinese saying that carrying out a reform is equivalent to a man cutting off his own arm, which is very hard. It might help if someone else forces you to do it.”

One particularly crucial tool in this fight is the Foreign Agents Registration Act. This week, the American Enterprise Institute will host a public discussion with the University of Pennsylvania Law School’s Center for Ethics and the Rule of Law on FARA and the ways in which it could be leveraged to better defend American democracy from foreign influence.

China’s and Russia’s Sharp Power: How Big a Threat? 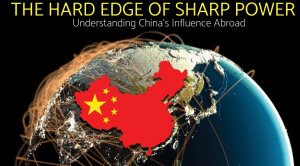