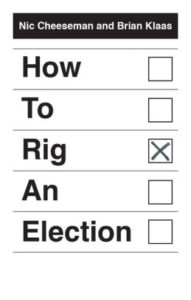 If a government wants to be considered a respectable democracy on the world stage, it must pass a litmus test: holding multi-party elections, note Nic Cheeseman, Professor of Democracy at the UK’s University of Birmingham, and Brian Klaas, LSE Fellow in Comparative Politics. But while more elections are being held around the world than ever before, the average quality of democracy around the world has fallen for the last ten years. The reason is that authoritarian leaders have learned how to rig elections, they write for the Conversation:

Looking into flawed elections in countries such as Belarus, Kenya, Thailand, Uganda, Tunisia, and Zimbabwe, we’ve come across all kinds of rigging strategies, from excluding opposition candidates from the ballot to getting the dead to vote.

But what we show in our new book, How to Rig an Election, is much more startling. Elections aren’t just failing to remove unpopular autocrats from power; they can actually make it easier for dictators to maintain political control. In other words, authoritarian regimes that hold elections are more stable than those that don’t.