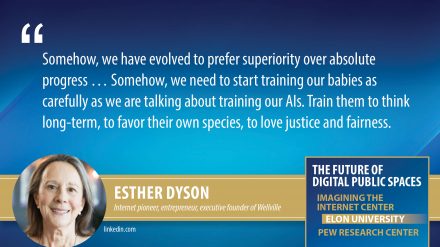 Public online spaces could significantly improve by 2035 if reformers, big technology firms, governments and activists tackle the problems created by misinformation, disinformation and toxic discourse, analysts suggest. But others expect continuing trouble as digital tools and forums are used to exploit people’s frailties, stoke their rage and drive them apart, Janna Anderson and Lee Rainie write in a new report from the Pew Center and Elon University.

“I see things getting both better and worse for people depending on who you are and under what jurisdiction you live. (It is ever thus),” said Esther Dyson (above), internet pioneer, executive founder of Wellville.net and former board member of the National Endowment for Democracy (NED). “There is no particular endpoint that will resolve the tension between more power for both good and bad actors.”

Those who worry about the future of democracy focus a lot of their anxiety on the way that the
things that happen in online public spaces are harming deliberation and the fabric of society, they observe in The Future of Digital Spaces and Their Role in Democracy. To be sure, billions of users appreciate what the internet does for them. But the climate in some segments of social media and other online spaces has been called a “dumpster fire” of venom, misinformation, conspiracy theories and goads to violence.

“Against all expectations otherwise, we are still in the ‘Wild West’ phase of the internet,
where ethical and regulatory frameworks have failed to keep up with rapid advances in technology,” notes Mark Davis, associate professor of media and communications at the University of Melbourne. 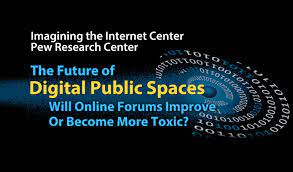 “The internet, in this phase, and against early utopic hopes for its democratic utility, has had severely negative impacts on democracy that are not offset by its more-hopeful developments such as Black Twitter and #metoo, among the many innovative, emancipatory uses of online media,” he adds. “One reason for this is that the surveillance business model on which digital platforms operate – which has seen traditional liberal democratic intermediaries displaced to some extent by algorithmic intermediaries – privileges quantities of engagement over the qualities of content.”

A selection of tech activists’ initiatives to redesign online spaces in ways that facilitate debate, enhance civility and provide personal security were described in a spring 2021 article in The Atlantic Monthly by Anne Applebaum and Peter Pomerantsev, the report adds, including:

A majority of experts surveyed said their hopes are tied to the tech industry, government and activist groups working to inspire the redesign of social media algorithms to improve individuals’ interactions and enhance democratic debate and its outcomes, Anderson and Rainie add. Additionally, many said they hope or expect that there will be better efforts toward enhanced and widespread digital literacy and the closing of digital divides; the formation of helpful new digital social norms; and much better government/public/corporate/nonprofit investment in accurate, fair journalism that is not tied to bottom-line outcomes. 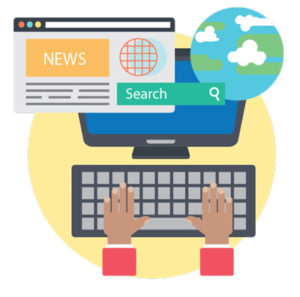 “It is difficult to recover a shared, collective sense of what the world is – ideologically, culturally, politically, ethically, religiously, etc. – when people are scattered across innumerable disembodied and nonlocal digital networks,” said Chris Arkenberg, research manager at Deloitte’s Center for Technology Media and Communications.

“The public discussion of this issue has only focused on the big social media services, but there are many other ‘digital spaces’ – in games, online forums, messaging platforms and the long tail of smaller niche groups both on the public internet and in dark nets,” he adds. “In 2035, there will be just as much – maybe more – fragmentation of the social commons through this proliferation of new types of ‘digital spaces’.”

Experts who doubt significant improvement will be made in the digital democratic sphere anytime soon argued that digital networks and tools will continue to amplify human frailties and magnify malign human intent, the report states.

“Balkanization due to politics and ideology will still create islands of belief and information in 2035,” Purdue University computer science professor Eugene H. Spafford predicted. “Some will embrace knowledge and sharing, but too many will represent slanted and restricted views that add to polarization.”

“Correcting this profound problem will require a reorientation of 21st century corporate,
national and interpersonal relationships that is akin to what is needed to meet the challenge of
reducing global warning,” said Joseph Turow, professor of media systems and industries at the University of Pennsylvania. “The problem is that corporate, ideological, criminal and government malefactors – sometimes working together – have been corrupting major domains of these wonderful features in ways that are eroding democracy, knowledge, worldwide communication, community, health and safety in the name of saving them.” RTWT