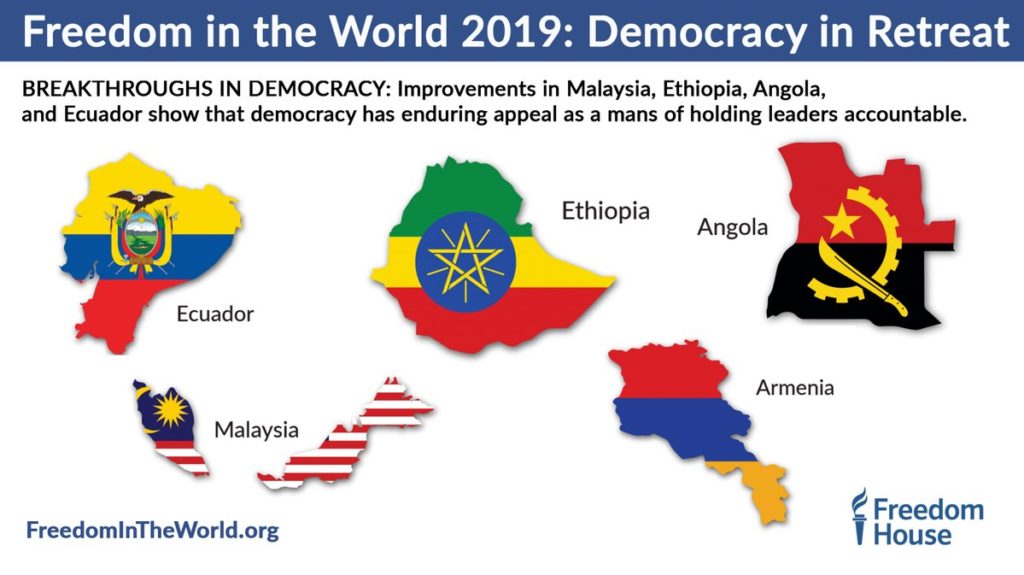 One year after the inauguration of Abiy Ahmed as Prime Minister, Ethiopia continues to be the world’s most exciting democratic breakthrough. Since his appointment, Prime Minister Abiy has initiated a series of broad economic, legal, and political reforms; appointed well-respected human rights leaders to key, independent government commissions; and encouraged the return of and met with opposition parties and exiled journalists and activists.

However, these reforms are fragile. Increasing ethnic tensions and conflicts with slow government responses, a struggling economy, slow implementation of electoral reforms and incomplete government messaging threaten the transformation.

For many, Abiy’s performance has marked a significant departure from past abusive practices, says Human Rights Watch:

His government has released tens of thousands of political prisoners, rewritten repressive laws, and made peace with previously banned opposition groups. He has increased the representation of women in his cabinet, acknowledged previous administrations’ widespread use of torture, and took steps to improve the independence of key institutions. His charismatic style appealed to individuals from across Ethiopia’s many ethnic and political divides, no mean feat in Ethiopia. It was a remarkable turnaround that followed several years of protests and excessive force by security forces that left over 1000 people dead.

“But for many others, Ethiopia has become a more dangerous place,” HRW adds. “As political space opened, Ethiopians were finally able to voice historic grievances that they bottled up for decades under an authoritarian government.”

Others suggest the country’s transition is poised between hope and fear.

A forthcoming panel discussion will examine the success, opportunities, and challenges of Ethiopia’s democratic transformation at this one-year anniversary.

invites you to a discussion of current developments in Ethiopia,

featuring a conversation with

Obang Metho, Founder of Solidarity Movement for a New Ethiopia

Tiffany Lynch, Program Officer for Ethiopia at the National Endowment for Democracy