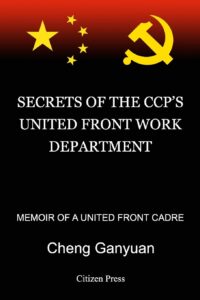 The United Front Work Department’s large-scale resources are visibly being channeled to secure China’s global outreach of its national power, Xi’s political thought, and his political strategy for the “Great Rejuvenation of the Chinese Nation (zhonghua minzu weida fuxing).”

In foreign activities, China’s influence operations in most cases are patterned through various UFWD outfits. Xi has asserted that the UFW network should adjust itself to the national goal and changing political environment for China’s rise by revitalizing the UFW with the Party’s mass line (dang de qunzhong luxian).

Africans appreciate China’s economic role but prefer democracy and freedom to authoritarianism, says a special report from The Economist. 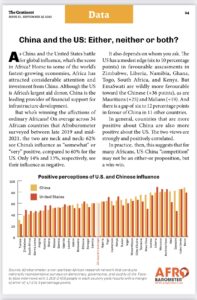 A survey of 34 African countries last year by Afrobarometer, a research group and National Endowment for Democracy (NED) partner, found that 63% of respondents felt China had a “very” or “somewhat” positive influence—more than the 60% who said the same of America. Polls in seven African countries for The Economist by Premise, conducted in April, found a similar result. In every country more respondents felt that China had a “good” than a “bad” influence, it observes:

Officials say China is more adept than Western rivals at helping politicians stay in power, especially by financing infrastructure projects. This is most obvious in one-party states, but even democratic leaders acknowledge it. Gabby Asare Otchere-Darko, a member of Ghana’s ruling party, argues that China helps governments respond to “the pressures of delivering in a democracy”. Yet polls suggest that ordinary Africans are less convinced. In a survey conducted for The Economist, Premise found majorities in seven countries (some authoritarian, some democratic) thinking that their country benefited from the relationship, but China gained more.