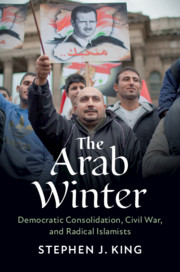 Tunisia’s interior regions have been a wellspring for social protests. Without deep economic restructuring, populists could pose an even graver threat to the country’s nascent democracy, argues analyst Hamza Meddeb. The political consensus in place since 2014 has stabilized Tunisian politics for a while, but it has reached its limits, he writes for the Carnegie Middle East Center:

The rise of populist and radical movements in the 2019 presidential and parliamentary elections reminded Tunisia’s political and economic elites that the country suffered from deep regional socioeconomic inequalities as well as corruption and clientelism that threaten the country’s democratic experiment. Both Ennahda and old regime representatives were pragmatic enough to agree on a transactional power-sharing agreement, but Tunisia’s democracy needs more.

Tracing the period of the Arab Spring from its background in long-term challenges to autocratic regimes, to the mass uprisings, authoritarian breakdown, and the future projections and requirements for a democratizing conclusion, Stephen J. King’s new book, The Arab Winter: Democratic Consolidation, Civil War, and Radical Islamists, establishes a broad but focused history which refines the leading theory of democratization in comparative politics, and realigns the narrative of Arab Spring history by bringing its differing results to the fore.

In his new book, “Watermelon Democracy: Egypt’s Turbulent Transition”, Joshua Stacher examines why Egypt is in its current state examining the election, economy, the military and of course state violence. Open Democracy’s Tugrul Mende asked him about his new book, revolutions, uprisings, and how to understand them. 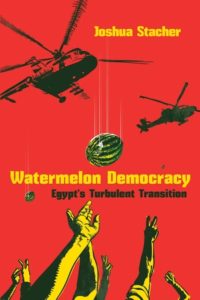 Amid civil wars, proxy rivalries, and seemingly entrenched authoritarianism, U.S. policies of democracy promotion in the Arab world are facing unprecedented challenges, the Carnegie Middle East Program observes. Does the U.S. advancement of democracy in the Arab world have any future? What tools or leverage are still available to American policymakers? And what lessons can be drawn from the past?

Join the Carnegie Middle East Program to hear from a panel of scholars and former policymakers discuss the current state of affairs and a new book by former U.S. diplomat Mietek Boduszynski.

Does U.S. Democracy Promotion Have a Future in the Arab World?

Mietek Boduszynski is an associate professor at Pomona College and a former U.S. Foreign Service officer. He is the author of U.S. Democracy Promotion in the Arab World: Beyond Interests vs. Ideals. Dafna Rand is the vice president for policy and research at Mercy Corps and a former deputy assistant secretary of state for the Bureau of Democracy, Human Rights, and Labor, and has held positions on the National Security Council.  Andrew Miller is the deputy director for policy at the Project on Middle East Democracy – a partner of the National Endowment for Democracy (NED) – and a nonresident scholar with the Carnegie Middle East Program. He served as the director for Egyptian and Israeli military issues on the National Security Council.  Frederic Wehrey is a senior fellow in the Middle East Program at the Carnegie Endowment for International Peace.