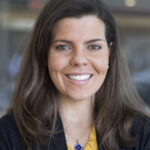 Following the attack on the U.S. Capitol last week, people on the left and right have blamed Fox News, CNN, and NPR for their apparent role in the act of sedition, accusing the media of partisan reporting, promoting political polarization, or ideological bias, writes Dominique Maria Bonessi (right), the Maryland Reporter with WAMU 885, the Washington, D.C., affiliate of National Public Radio, and a Penn Kemble Fellow at the National Endowment for Democracy.

But, it was not “the media” busting down doors and windows, assaulting police and other law enforcement officers, and striking our core pillars of democracy. Instead of blaming “the media,” a generalized behemoth term often used as a pejorative, one should look no further than the media illiterate.

I don’t ever recall taking a media literacy class in school, but I do remember my mother telling me to “read everything.” It was that sense of curiosity and thirst for knowledge that probably made me become a journalist.

As a journalist, I’ve invested time and money into a media literate diet. A media literate diet is much like a nutritional diet with carbohydrates, protein, and fat. You need to eat each kind of food group in order to live a healthy lifestyle. Now some people prefer a keto diet or a vegan diet, but they’re still getting some form of macronutrients. All of these food groups are necessary and vital to your survival and well-being. 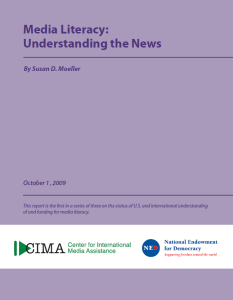 This is similar to a media diet where you have the choice to consume radio, online news, or television broadcast. Within each of those macro categories lies breaking news, investigative features, and commentary on the right and left. Consumers of news have the choice to engage in a multitude of news resources to fulfill their need to know what’s happening in the world. Just like balancing your food groups, you have to balance your news consumption. I’ll admit, as a radio reporter, I enjoy listening to my news; however, I also find myself reading new stories. But it’s no good just listening or reading the same outlets everyday. A media literate person needs to have a diversity of micronutrients or perspectives, or going back to what my mother says, “read everything.”

The media literate person listens, reads, and/or watches news from all perspectives and sides. Maybe they start their day with a bowl of NPR then add an article or two from the Wall Street Journal, The Economist, or The New York Times, and mix in some Fox News or MSNBC. By following news from these various different outlets you’re getting perspectives you may or may not agree with, but at least you know what the other side is saying.

Being media literate takes time, it takes a commitment, and it takes a little bit of money if you want to get beyond the paywalls. Many busy people juggling work, family, and household chores  passively watch, read, or listen to the news while sitting in traffic, cooking dinner, or working out. It’s understandable, the average consumer doesn’t have time to sit down and read a newspaper in this fast paced world–it’s something of the past.

But the alternative to not taking the time to actively partake and seek out the multitude of reliable news sources, and be a media literate individual is scarier.  The alternative is being media illiterate in which the unverified, non-factual second-hand  “news” from your friends on Facebook, YouTube or other social media sites is seen as a reliable source of information. People who are media illiterate don’t know about the need to seek out diverse, reliable sources to combat their confirmation biases. When large groups of individuals on all sides of the political spectrum fail to practice media literacy it leads to an uneducated public one that is easily influenced–dare I say, gullible–to easily believe what one person tells them.

Gullible enough to believe that by attacking the U.S. Capitol you could somehow stop a democratic election from taking place.