A Burundian activist has been jailed for five years accused of preparing reports on human rights abuses for a banned organisation, militant and legal sources said on Tuesday, AFP reports:

Nestor Nibitanga [left], who was convicted and sentenced on Monday, “long ran our office in Gitega” in central Burundi, said Pierre-Claver Mbonimpa, the exiled president of the Association for the Protection of Human Rights and Detained Persons [APRODEH – a former grantee of the National Endowment for Democracy]. This association was the main rights movement in the country until the regime shut it down after a political crisis erupted in 2015.

Nibitanga’s arrest was “just the latest in a broader crackdown on independent human rights activists and journalists in Burundi,” said Ida Sawyer, Central Africa director at Human Rights Watch. “While many independent activists and journalists in Burundi have been forced into exile, the arrest of Nibitanga [sent] a chilling message to the few who have remained behind that they stay at their own peril.” 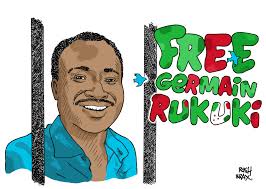 Another pro-democracy activist, Germain Ruvakuki, was sentenced to 32 years’ imprisonment in April for “insurrection” because of his membership of a civil society organization leading the 2015 protests against President Pierre Nkurunziza’s third term in office, Jeune Afrique adds. Burundi has undergone a deep political crisis because of Nkurunziza’s determination to remain in power, despite criticism from the opposition, civil society, the Catholic Church and the international community.

“Those in power pursue the repression of independent civil society, but in any case, we didn’t expect anything else from a judiciary that takes orders from the executive,” Mbonimpa (left)  told AFP, referring to Nibitanga’s conviction.

“At least he wasn’t tortured and killed like other activists or (political) opponents arrested by this regime, even if he copped a free jail term,” added the APRODEH chief – aka “Burundi’s Mandela” – who was seriously wounded in an attempt on his life in August 2015.