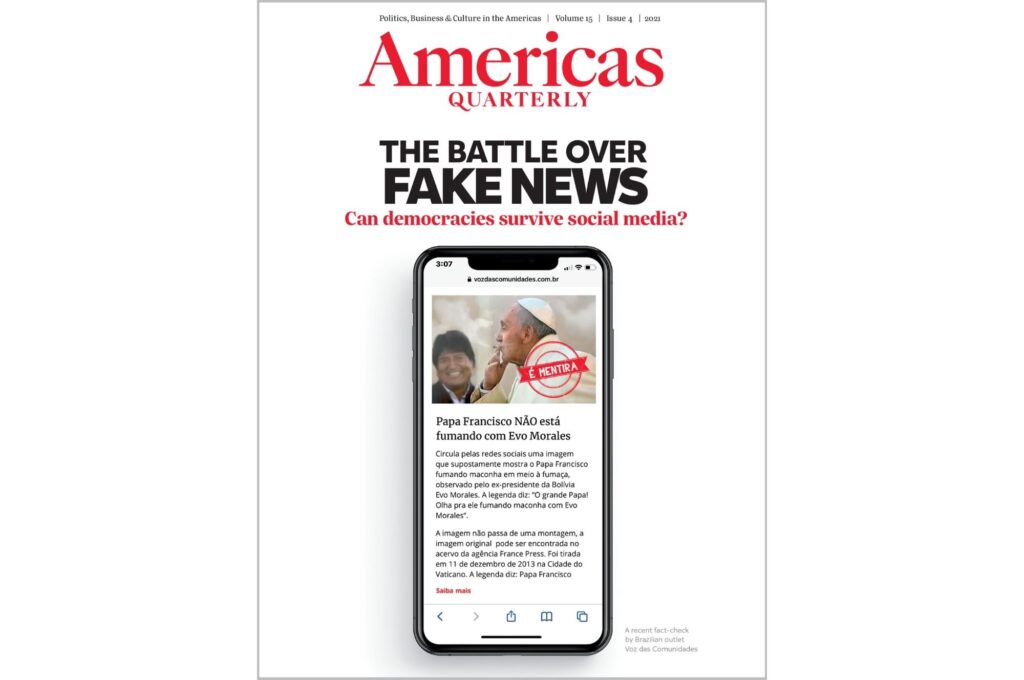 A photoshopped image depicting Pope Francis smoking marijuana with former Bolivian President Evo Morales, thus “proving” the Argentine pontiff is a decadent socialist at heart, was the most ridiculous recent example of fake news we could find. But it was hardly the most damaging, Americas Quarterly reports.

A special AQ report focuses on the profound, and possibly terminal, threat that fake news and misinformation pose to the democracies of the Americas. Upcoming elections over the next year in Chile, Colombia and, especially, Brazil will be a major test. President Jair Bolsonaro and other leaders seem determined to protect their “freedom of speech” online, setting up a showdown with courts and tech companies—and possibly a constitutional crisis in Brazil. Other governments, social media companies and traditional media are brandishing an array of tools in the hope of halting the decay. But there is no silver bullet, and some of the proposed cures, such as government-run fact-checking agencies or jail time for those who propagate fake news, may be worse than the disease. RTWT

Despite an extremely challenging landscape, Contracorriente (below), a digital media outlet and National Endowment for Democracy (NED) grantee, provides citizens of Honduras and international audiences with in-depth investigations of the most pressing issues confronting democracy and human rights.

“Our stories always connect us with someone else who has had their rights violated because of corruption, because of violence, because of the authoritarianism of the government,” said Catherine Calderón, Contracorriente’s co-founder and head of development.  RTWT