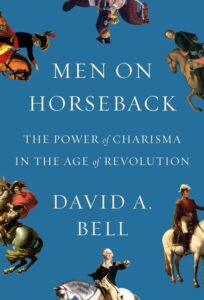 The rise of autocrats today indicates that charismatic leaders, especially those who maintain that achieving national glory trumps boring institutions like laws, are finding a receptive audience, a new book suggests.

“A potentially authoritarian charisma is as modern a phenomenon as any of the liberal ideas and practices that arose in the age of revolution,” Bell writes in Men on Horseback: The Power of Charisma in the Age of Revolution.

Modern democracy, militarism, and the cult of the strong man all emerged together, he contends. Charisma is democracy’s shadow self, and it cannot be dispelled.

“Charisma is an integral, inescapable part of modern political life—democracy’s shadow self….Its modern forms arose out of the same cultural and intellectual universe that gave birth, in the age of revolution, to modern constitutional, democratic regimes,” he writes:

The existence of populist leaders “should not discredit the use of a charismatic politics for democratic, liberal ends,” he argues, because fighting for democracy “requires more than principles and causes—it requires leaders who can elicit emotions powerful enough to impel people to action”…..  Having accepted the inevitability and even desirability of charismatic leaders in modern politics, Bell ends with an enjoinder “to choose these charismatic leaders wisely, by judging as carefully as possible both the individuals themselves and the causes for which they stand.” RTWT