As Russia and China unleash an online wave of disinformation about COVID-19, the pandemic is shifting “from a war for survival to a war of ideas and a war of ideology,” according to one observer.

Some of the disinformation circulating online amounts to conspiracy theories about the origins of the virus — claims that it was invented in a lab or brought to China by U.S. soldiers, for example, CBC News reports:

Canadian Philip Howard heads the Oxford Internet Institute, a U.K.-based academic body studying the sociology of the internet. He said the pandemic has seen an increase in misinformation and disinformation related to COVID-19 being spread by sources related to foreign governments. 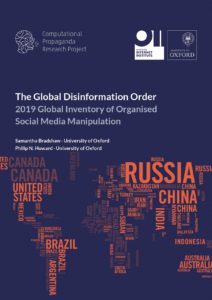 Stephanie Carvin, a former security analyst for the Canadian government who now teaches at Carleton University, said the pandemic is moving “from a war for survival to a war of ideas and a war of ideology.”

“Because there is no clear story here, and because China will almost make it impossible for us to probably ever find out how this really happened, this is going to lend itself to disinformation for decades,” she said.

The Raoul Wallenberg Centre for Human Rights will be hosting a major online conference on Tuesday, June 9 from 5:00-8:00PM EDT bringing together some of the world’s leading voices to address human rights in China during the Coronavirus pandemic.

The webinar will consist of three panels: China’s attempt to quarantine the truth and increasing threats against the media and journalists; China’s political prisoners and mistreatment of minorities; and identifying ways to hold the Chinese government accountable for the pandemic and human rights abuses.

China at a Crossroads: Standing up for Human Rights During the Pandemic

– Jewher Ilham, Human rights activist and author whose father, an Uyghur scholar, is detained by the Chinese state

– Naomi Kikoler, Director of the Simon-Skjodt Center for the Prevention of Genocide at the US Holocaust Memorial Museum

– Sheng Xue, Chairperson of International Federation for a Democratic China

This event is hosted and co-sponsored by the Montreal Institute for Genocide and Human Rights Studies, Freedom House, the National Endowment for Democracy, China Digital Times, the Geneva Summit for Human Rights and Democracy, the Uyghur Rights Advocacy Project, Canada Tibet Committee, International Coalition to End Transplant Abuse in China, the Federation for a Democratic China and the Nobel Women’s Initiative.