The United States and China are in a competition to shape the course of the 21st century. At stake is whether the prevailing international order that has backstopped peace, prosperity, and freedom will endure, or whether Beijing’s emerging vision – a world defined by great power spheres of influence, rigged economic interactions, and ascendant authoritarianism – will become the global reality, according to Dr. Daniel Kliman and Abigail Grace.

To realize its vision, China is making multiple power plays, including what it calls “One Belt, One Road,” its newest initiative combining economic, diplomatic, military, and informational instruments of statecraft, they write in Power Play: Addressing China’s Belt and Road Strategy, a new report from the Center for a New American Security. 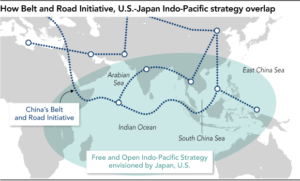 Hardly a champion of democracy and human rights, China has shown a willingness to defend authoritarian leaders in increasingly far-flung locations closely linked to its Belt and Road [the subject of a National Endowment for Democracy report]. The Maldives is a case in point, where Beijing supported President Abdulla Yameen after his declaration of a state of emergency and jailing of judges and opposition politicians… Countries taking Chinese investment under the Belt and Road run a high risk of governance declines, in part because many lack strong institutions, and because corruption and the resulting capture of elites can serve as a tool for Beijing to secure projects with strategic potential.

Kliman and Grace make several recommendations, including on governance and development:

As China’s roots in Africa deepen, Beijing increasingly faces accusations of burdening the continent with undue debt obligations, says analyst Jennifer Spies. China has changed the composition of African debt from primarily concessional financing (such as that of the International Monetary Fund) towards market-based debt with less favorable term, she writes for the Council on Foreign Relations:

Over the past five years, two-thirds of sub-Saharan African countries saw a 20 percent increase in debt-to-GDP ratios (though this rise is not necessarily attributable to Chinese loans). Eighteen countries including the Republic of Congo, Gambia, Zambia, and Mozambique are now classified by the World Bank as high risk for debt distress, a benchmark set by economists when debt-to-GDP ratios surpass 50 percent. In some countries, like Kenya, China is now the largest bilateral creditor.

China at risk of becoming a colonialist power

China’s leaders and theoreticians would do well to study the history of British imperialism for evidence of how economic projects can lead to empire, says FT analyst Jamil Anderlini:

China is at risk of inadvertently embarking on its own colonial adventure in Pakistan— now virtually a client state of China. Many within the country worry openly that its reliance on Beijing is already turning it into a colony of its huge neighbour. The risks that the relationship could turn problematic are greatly increased by Beijing’s ignorance of how China is perceived abroad and its reluctance to study history through a non-ideological lens.