American investors are asking whether China Inc. is still worth the risk following a widening series of regulatory crackdowns that have wiped some $400 billion off the value of U.S.-listed Chinese companies, the Wall Street Journal reports.

President Xi Jinping’s government is reining in the country’s most powerful corporations, including Alibaba Group Holding Ltd., Tencent Holdings Ltd and Didi Global Inc., along with their billionaire founders, Bloomberg adds. The scrutiny is shaping up as one of the largest concerted actions against private enterprise in decades and raising the prospect that the leeway enjoyed by entrepreneurs like Jack Ma, founder of both Alibaba and the sprawling Ant Group Co., might be coming to an end, it reports:

Maintaining social stability is one of the signature goals of Xi and the ruling Chinese Communist Party, so any company or person it perceives as threatening that can find themselves in the cross-hairs. Such a sweeping definition also means just about any large business could find itself the subject of a crackdown. 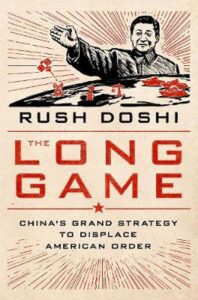 As the Biden administration crafts a plan for dealing with the rapid rise of an authoritarian, America-scorning China, its officials must answer two crucial questions: “What does China want?” and “What can it achieve?” the Economist observes:

In a new book, “The Long Game”, Rush Doshi paints a particularly gloomy picture: China aims to achieve global supremacy by 2049, when the Communist Party hopes to celebrate 100 years in power. Mr Doshi is one of President Biden’s advisers on China policy in the National Security Council, having been a specialist in Chinese strategy at the Brookings Institution, a think-tank in Washington. His views carry weight.

He also says America should reinforce the attributes that have helped it to “attract the allies, immigrants and capital that underpin liberal order”, such as openness and the rule of law. That is surely the right conclusion, even though Western scholars will still disagree over China’s grand plans, it adds.

At a speech in Singapore on Tuesday night, US Secretary of Defense Lloyd Austin said while the US didn’t want conflict with China, Beijing was showing an “unwillingness to resolve disputes peacefully and respect the rule of law” in the South China Sea, the Taiwan Strait and in the western region of Xinjiang, CNN reports:

Yet Willy Lam, an adjunct professor at the Chinese University of Hong Kong, said neither side had actually put anything in place to stop conflict from happening. No further talks are planned publicly, and expectations of a possible meeting between US President Joe Biden and Chinese leader Xi Jinping at the G20 in October weren’t raised.

“So there is room for further deterioration but there are no signs of possible improvement, even in areas where they have common interests,” said Lam.

Nathan Law, a leader of Hong Kong’s 2014 Umbrella movement, talks about fleeing his home and how the West should counter China. In the long run the global economy’s reliance on China will decline. For now, it is just so intertwined in the economic policy of many foreign countries, he tells Chatham House analyst Ben Horton:

We should seek more cooperation between democratic countries to decrease the risks of economic blackmail or intimidation from authoritarian regimes such as China. Britain should really cultivate its policies in that fashion. We have to make clear the threat that China poses to our global democracy.

But Hong Kong’s civil society is withering and dying, an activist tells AFP:

According to an AFP tally, at least 30 organisations have shut down or gone silent in the last 12 months, including the Progressive Lawyers Group and several organisations representing medics. One of the largest doctor unions — the Public Doctors’ Association — has mulled calling it quits, former president Arisina Ma told AFP, citing the “loss of space… to speak up”.