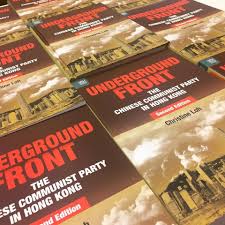 Across the border from Hong Kong, the Chinese Communist Party screams its presence with banners and slogans on nearly every street. Yet in the former British colony, where China’s ruling party confronts what it calls a “life and death” struggle against a turbulent protest movement, it is invisible: It is not registered and has no publicly declared local members, The New York Times reports:

But in Hong Kong, this officially nonexistent organization is in the vanguard of defending Chinese rule in the face of its biggest public resistance since the authoritarian leader Xi Jinping came to power in 2012. The party, operating in the shadows through individuals and organizations, is driving an increasingly firm pushback against the antigovernment protests, now in their 12th week.

“It is a massive P.R. exercise to bring people on side,” said Christine Loh, a former government official and the author of “Underground Front,” a book on the party’s methods in Hong Kong.

The big difference between the Hong Kong protests and the anti-Communist upsurge of 1989 is technology, says Times columnist David Brooks:

Technology allows the protesters to suddenly appear and suddenly disappear, ebb and flow — to “be water,” in Bruce Lee’s phrase. The protesters have online votes about where to take their protest next. They use AirDrop to download subversive pamphlets into the phones of unsuspecting tourists from mainland China. There’s an amazing diversity of strategies. The accountants listen to speeches. The Christians sing. The radicals storm the subways.

Supchina takes a closer look at the “sharp power” disinformation being peddled by CGTN, which stands for “China Global Television Network,” and is under the control of the Publicity Department of the Communist Party of China, including a misleading attack on the Washington, D.C.-based nonprofit National Endowment for Democracy (“NED”). The last NED involvement in Hong Kong that the video identifies dates back to the Occupy Central movement in 2014. RTWT