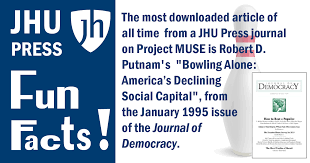 Two decades ago, Robert Putnam published a book that provoked a small cottage industry’s worth of responses from pundits and scholars alike, notes Alexandra Hudson, a former policy advisor at the U.S. Department of Education. Bowling Alone, based on an essay of the same title Putnam had written for the Journal of Democracy five years earlier, made a claim that cut to the quick of American identity: Americans just aren’t doing things together anymore. By choosing to engage in activities individually rather than communally, he asserted, we were putting at risk America’s capacity to build social capital and undermining our national character, she writes for National Affairs.

Social media have only further atomized individuals and enhanced political polarization, according to a new, disturbing, must-view film, The Social Dilemma (see below). 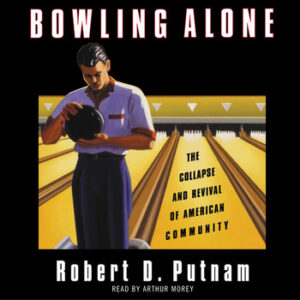 But internet-enabled communication does have its advantages, too, Hudson contends. Some forms of organizing, activism, socializing, and mutual aid are greatly enabled by online interaction. In fact, there are examples of digital communication building social capital and promoting democratic ideals in unprecedented ways, she writes:

Take the story of Manal al-Sharif, a Saudi woman whose life changed dramatically after she posted a video of herself driving — in defiance of a de facto ban on female drivers in Saudi Arabia — on YouTube. Her video went viral immediately, but it wasn’t until she was released from jail as a result of her video that she realized its full impact. The free world lauded al-Sharif as the “Saudi Rosa Parks”; she was overwhelmed at the outpouring of support from strangers on Twitter and Facebook.

Whatever challenges our social institutions may confront, mankind’s underlying hunger for engagement and community can never be eradicated, Hudson adds. In fact, it may be that the alarmism following Putnam’s original proclamation of civic atrophy deserves some credit for subsequent bursts of civic renewal. RTWT