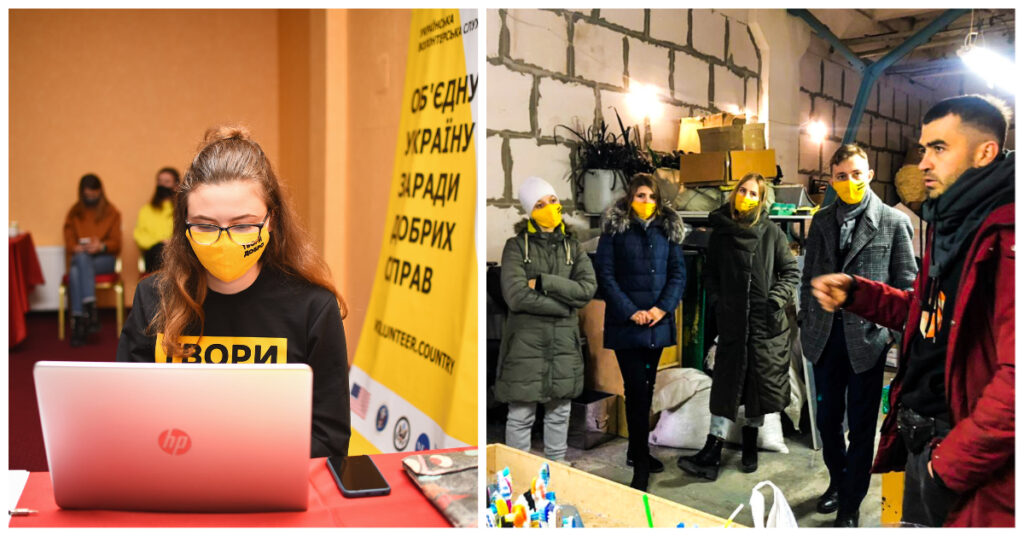 Russian strategy toward Ukraine is designed to demoralize and demotivate, notes Anne Applebaum. But it encounters a potent countervailing force in the form of activists and volonteri in groups like Anna Bondarenko‘s Ukrainian Volunteer Service (UVS – above)* and Mikhail Reva’s Reva Foundation, which has drawn not just on Ukrainian civil society to support the Ukrainian army, but civil society in many countries.

Too often, in America and Europe, our definition of civil society is cramped and narrow. We use the term to mean “human-rights groups,” or confuse it with nonprofits, as if civil society consists solely of organizations with HR departments and neat mission statements, she writes for The Atlantic:

But civil society can also have an anarchic, spontaneous character, coming into being in response to an emergency or a crisis. It can look like the Odesa schoolroom temporarily packed to the ceiling with canned food, paper towels, childrens’ diapers, bags of pasta, where Natalia Bogachenko, a former businesswoman, runs a distribution point for humanitarian aid (“controlled chaos,” she calls it). It can look like the two chic Kyiv restaurants from which Slava Balbek started a food kitchen for the territorial army during the first days of the war, eventually organizing 25 restaurants and two bakeries into a cooperative that cooked thousands of meals every day.

The volonteri will create Ukraine’s postwar culture, rebuild the cities and run the country in the future, Applebaum adds. They have defined themselves against a Russian autocracy that suppresses spontaneity and creativity, and they will go on doing so long after the war is over. RTWT

*A recipient of the National Endowment for Democracy’s 2022 Democracy Award.