Europe is in a tough spot, as it tries to reconcile the rise of populism with the need to confront migration, climate change, the digital revolution, the structure of its governance, and an eternal Brexit, The New Yorker’s Lauren Collins writes. French President Emmanuel Macron is one of the few European leaders to recognize the urgency of the threat and to prescribe democratic renewal as the necessary response.

If his ‘Macronism’ succeeds, it could be the beginning of a renewal of French democracy; if it fails, it will have been an interregnum before the era of Le Pen and her brand of far-right populism. The European elections in May served as a sort of midterm checkup, she observes;

“On the national level, this is the confirmation of 2017,” Macron told me. “A lot of politicians thought that 2017 was an exception, or something like an aberration. This is no longer the case.” ….”I hate solutions without problems,” Macron told me at the Élysée. The remark—a little bit corporate, a little bit profound—brought home for me the pragmatic, post-ideological bent of his politics. …As Macron’s former advisers Ismaël Emelien and David Amiel recently wrote, the strategy is to “identify the causes of the populist vote and respond methodically. If we succeed, we will dry it up.” 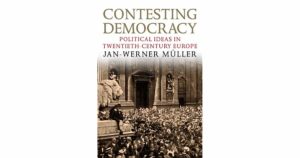 According to Jan-Werner Müller’s* excellent book Contesting Democracy: Political Ideas in Twentieth-Century Europe, the extension of the franchise at the end of the 19th century saw the irruption of the masses into politics, ending the idea of politics as an elitist gentleman’s club, and generating a crisis of representation at two levels, notes analyst Stephane Wolton:

Two competing (broad) answers were proposed: the politics of moderation (or compromise), and the militarized politics of the will. The latter was tried first, and only its failure left political space for the former, he writes for Democratic Audit.

The conventional wisdom overstates the role of economic insecurity as a principal driver of populism in several ways, Tel Aviv University’s Yotam Margalit contends in Economic Insecurity and the Causes of Populism, Reconsidered:

Consequently, taken together, policies aimed at alleviating economic insecurity are likely to have only a modest impact on the populist appeal, he contends.

Pointing out that populists benefit most from economic dislocation is one thing; explaining why them and not others is another, the LSE’s Wolton writes:

*Also the author of What Is Populism? (above).