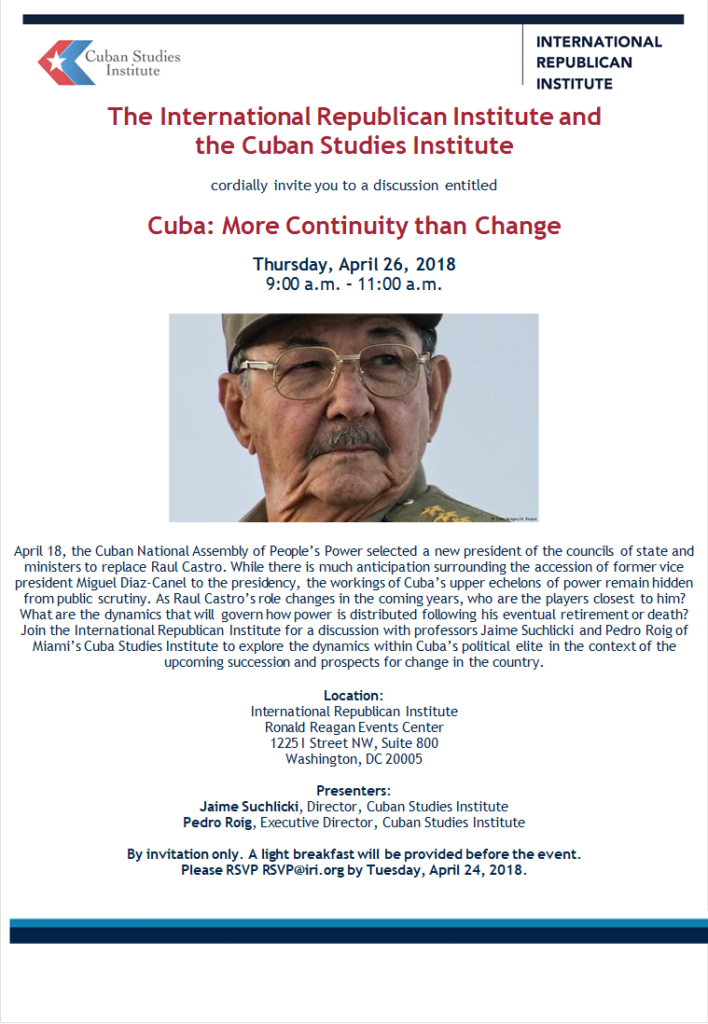 Miguel Diaz-Canel succeeded Raul Castro as Cuba’s president on Thursday, saying that there will be “no space for those who aspire for a restoration of capitalism, the LA Times reports (HT: CFR).” He will be scrutinized by members of an inner circle that aims to guarantee the succession of a socialist state — all while managing the delicate task of not creating the appearance of a family dynasty reaching into its third reign, the Times adds.

“Don’t anyone get their hopes up,” said María C. Werlau, a Cuba researcher who studies the violent legacy of the Cuban revolution. “Díaz-Canel is purely there for a cosmetic change; he is an offshoot of Raúl and has no power or perceptible source of power. The succession is well underway, and the second generation of Castros is well lined up to take control when Raúl is really out of the picture.”

The handover was “an illegitimate transition,” according to the Organization of American States. “The presidential succession we have witnessed in Cuba is an attempt to perpetuate a dynastic-familial autocratic regime. It is called a dictatorship,” said the OAS General Secretariat.

“We cannot allow the Cuban people to continue to be oppressed by an infamous dictatorship, a dictatorship that carries the weight of decades of human rights violation,” said OAS secretary general Luis Almagro (left), addressing a gathering civil society activists at the Summit of the Americas.

But regional governments cannot reach a consensus on Cuba or Venezuela, analysts suggest.

“OAS member states are completely deadlocked over democracy promotion in the Americas,” Harold Trinkunas, senior fellow of the Latin America Initiative at the Brooking Institution, told the World Weekly, “with a substantial number opposing a pro-democracy agenda for the region.”

Díaz-Canel is “a puppet of the Castro regime,” said a group of Cuban dissidents.The “true Cuban civil society” and spokesperson Rosa Maria Paya called on the OAS and regional leaders to not recognize Diaz-Canel because the Cuban people “deserve to elect a true President.”

As human rights watchers have noticed, Cuba remains one of the world’s most oppressive regimes, Frida Ghitis writes:

The nonpartisan Freedom House ranks it “Not Free,” without a free press, economic, or political freedoms. Those who challenge the status quo or try to set up civil society organizations outside Communist Party control have endured harassment, arrests, disappearances, and mysterious accidents.

Some see Díaz-Canel’s persona as crafted and less genuine than is often supposed. “It was a bit of demagoguery… It was a bit a manipulation of the people,” said Guillermo Fariñas, a well-known dissident and Cuban psychologist who grew up with Mr. Díaz-Canel in Villa Clara, the Times adds:

Mr. Fariñas recalled how, after graduation, Mr. Díaz-Canel became a teacher and party functionary at his university, joining a nationwide campaign to fight “negative tendencies” in Cuba. “They tried to convince people that if you were not a real communist, you had to be sanctioned,” Mr. Fariñas said of Mr. Díaz-Canel. “He was the head of that at the university.”

It’s been a totalitarian state since 1959, says Christopher Sabatini, lecturer of international relations at Columbia University’s School of International and Public Affairs and executive director of Global Americans:

There are no democratic elections. Cubans are not allowed to congregate freely and are limited in their freedom of expression and access to information. There’s only one official newspaper run by the Communist Party, and it consists almost entirely of

propaganda to support the party and its policies.

“The result is that Cubans have become atomized,” he tells the Council on Foreign Relations. But not so atomized that individual Cubans will not speak out.

Juan Menendez (below) did what Cubans are taught never to do: speak openly and critically about their government (HT: Center for a Free Cuba):

Juan was so plain-spoken about poverty, censorship, intimidation, and general mismanagement of his country, it was easy to forget we were in Cuba–and that Juan was incredibly brave for speaking out. In this video, Juan says he hopes his children can someday watch this video to see their father wasn’t scared.

Diaz-Canel is faced with some very serious challenges, adds Sabatini, a former Latin America program officer at the National Endowment for Democracy: