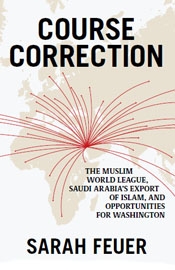 Throughout 2016 and 2017, statements from Riyadh suggested that Saudi Arabia might be on the verge of reorienting its decades-long promotion of Salafism around the world, according to a new analysis.

Given the sheer scale of the kingdom’s support for Islamic institutions over the years, the ripple effects of such a shift would be profound, notes Sarah Feuer, an expert on Middle East religion and politics. Saudi efforts to propagate its particular brand of Salafism have long been anchored in the Mecca-based Muslim World League, but the ascent of Crown Prince Muhammad bin Salman has apparently shunted the MWL in a different direction. Recent initiatives suggest Riyadh has assigned the league a central role in its broader religious reform agenda, at least as it applies to the export of religious doctrine abroad, she writes in Course Correction: The Muslim World League, Saudi Arabia’s Export of Islam, and Opportunities for Washington.

Saudi religious export and diplomacy are aimed at shoring up the monarchy’s international legitimacy against ideological competitors and threats, Feuer contends:

Throughout much of the Cold War, for example, the Saudis’ promotion of Islam was viewed as an important asset in the effort to contain Soviet Communist ideology and influence in
the Middle East. Since the 1990s, however, Saudi support for Islamic streams outside the kingdom—sometimes in ways that benefited the agenda of terrorist organizations and of organizations with demonstrated ties to terrorist groups—has been decidedly inimical to U.S. interests. Perhaps the most recent and glaring example was the so-called Islamic State’s use of Saudi textbooks in its schools throughout 2015.

Nevertheless, constructive relations with Saudi Arabia, fraught as they may be, remain critical to U.S. interests, not least the endeavor to combat the spread of extremist ideologies, Feuer suggests in the Washington Institute report. She recommends expanding reporting mechanisms in nations where the MWL is active, pursuing avenues to engage directly with the league, and incorporating religious reform into the high-level U.S.-Saudi strategic dialogue, all toward promoting moderation and undermining extremism. RTWT