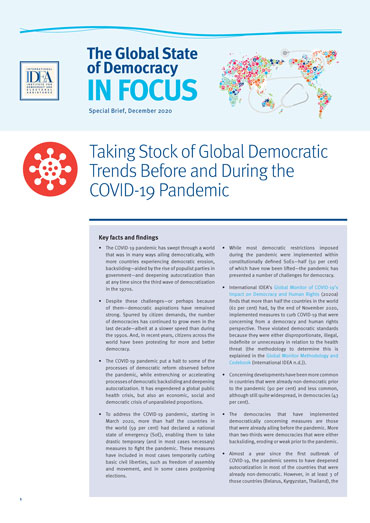 More than six in 10 countries around the world have adopted measures during the Covid-19 pandemic that threaten democracy or human rights, a report by the Stockholm-based democracy institute International IDEA said Wednesday, AFP reports.

International IDEA’s Global Monitor of COVID-19’s Impact on Democracy and Human Rights finds that more than half the countries in the world (61 per cent) had, by the end of November 2020, implemented measures to curb COVID-19 that were of concern from a democracy and human rights perspective. Among countries widely considered democracies, 43 percent fell into the category of nations that “implemented restrictions that were either illegal, disproportionate, indefinite or unnecessary” in at least one area of democratic freedoms, a figure that rose to 90 percent for authoritarian regimes. 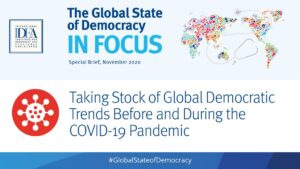 In 2020, nearly half of democracies worldwide regressed on basic democratic and human rights standards, exacerbated by measures taken in response to the COVID-19 pandemic. Restricting information and clamping down on freedom of speech and on independent media have been embraced under the pretext of addressing the pandemic, according to the Global State of Democracy (GSoD) in Focus.

“It was to be expected that authoritarian regimes that had less checks and balances would use the excuse provided by the pandemic to tighten their grip,” secretary general Kevin Casas-Zamora told AFP. “What is more surprising is that so many democracies have adopted measures that are problematic from the standpoint of democracy and human rights.”

“The pandemic is an accelerator of trends that were in place before the virus struck,” he added. 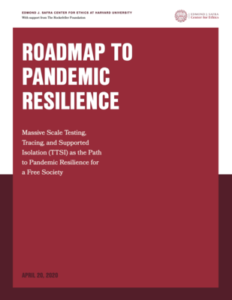 Yet the pandemic has also showed the resilience of many democracies in reaching broad political agreements in a time of crisis, International IDEA notes. In most democracies, accountability mechanisms have prevented executive over-reach. Some courts, legislatures and political parties have fought back against trampling over democratic rights. Successful cases of addressing the pandemic while adhering to democratic principles include Iceland, New Zealand, South Korea, Taiwan and Uruguay.

“Battling the pandemic while keeping to fundamental democratic principles is not only possible, but effective. Some of the countries with the most effective responses to the spread of COVID-19 have been some of the highest performing democracies” said Annika Silva-Leander, Head of Democracy Assessment at International IDEA and the lead author of the report.

India, a democratic country, held the unenviable top spot, AFP adds, with measures of “concern” in nine of 22 areas studied — including freedom of movement, freedom of expression and freedom of the press — ahead of Algeria and Bangladesh with eight areas of concern, followed by China, Egypt, Malaysia and Cuba, which each had seven. Russia was the top European nation with six, a score shared by Saudi Arabia, Myanmar, Jordan, Sri Lanka and Zimbabwe.

While the report found “democratic aspirations have remained strong,” it warned that an impending financial crisis “will likely deepen civic dissatisfaction with democracies and non-democracies alike” and that more protests and civil unrest were likely in the years ahead, POLITICO adds.

The report validates concerns expressed in an open letter published in October which warned that the pandemic posed serious threats to democracy. “A Call to Defend Democracy,” an Open Letter initiated by the Stockholm-based International IDEA and the US-based National Endowment for Democracy, was signed by 73 pro-democracy institutions as well as a roll call of global political and civic leaders, including 13 Nobel Laureates and 62 former heads of state and government.

“This unprecedented demonstration of global solidarity is a sign that democracy, while threatened, is also resilient,” said NED President Carl Gershman. COVID-19 represents what you might call a battle of narratives between authoritarian countries and democracies, he told Forum 2000.