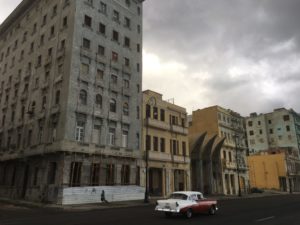 A former high-ranking judge in Cuba has joined an anti-government activist in revealing information from secret government documents that show the government is holding thousands of inmates on dubious charges and has the highest incarceration rate in the world. The revelations by Edel González Jiménez, who spent more than 15 years on the bench and once supervised 65 other judges, are believed to be the first public challenge to the Cuban government by a top member of the judiciary, The New York Times reports:

Choking back tears, Mr. González told the audience that his wife had advised him not to speak out, but that he had gone against her wishes because he felt it was his duty to challenge the government.

Mr. González said that Cuba’s judiciary was often controlled by state security forces that can manufacture cases against political opponents — a statement that critics will readily agree with, but that is surprising coming from a man who insisted that he remains a faithful member of the Communist Party of Cuba and a believer in Fidel Castro’s project. 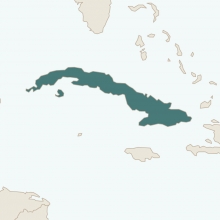 Approximately 8,400 Cubans currently serve time for ”pre-criminal social dangerousness” – a term used by the regime to jail people who pose a risk to the status quo, without having committed a crime, according to new documents presented by Civil Rights Defenders and Prisoners Defenders on 13 January:

Around 4,000 Cubans every year are accused of being ”antisocial” or ”dangerous”, without having committed a crime. The phrase is commonly applied to people who are unemployed, behave undisciplined or harass tourists. The documents were revealed during a press conference in Madrid on Monday 13 January. During the press conference, former Cuban high-ranking judge, Edel González Jiménez commented on the human rights situation in the country.

“The repression that I am seeing against part of my people is not what I want for my people. I have a lot of fear about the future. Every day Cubans face more fear. I don’t want blood on the streets of Cuba, I don’t want these imprisonments,” González said during the press conference in Madrid.

Mr. González was joined at the news conference by Javier Larrondo, a longtime anti-Castro activist who runs Prisoners Defenders in Madrid, in publicly announcing his call for the Cuban government to respect civil rights. “This is an important blow to the regime,” Mr. Larrondo told The Times.

Rosa María Payá, president of the Latin American Network of Youth for Democracy and Cuba Decide, said that the Cuban dictatorship is the “elemental root” of Latin American instability…. It’s totalitarian ideology  also is the basis of the communist party in all Latin America, the basis of social movements and NGOs in Latin America,” Payá told a session titled “Initiative for Democratic and Economic Alternatives (IDEAS) for Cuba” at the State of the World 2020 forum, writes Gabriella Pinos, Opinion Director of Panther Now:

Changing the system requires the Cuban people to participate in free and democratic elections, something that Payá, through the initiative Cuba Decide, is trying to create. However, even with the people’s vote, Payá said much more needs to be done to change the island’s government….

José Carlos Sánchez Berzain, a former Bolivian defense minister and director of the Inter-American Institute for Democracy, called the movement “Castrochavismo,” referencing the ideology of the Castro regime in Cuba and that of former Venezuelan president Hugo Chavez. He and the other panelists cited the destabilization in Ecuador, Chile, and Colombia, among others, as examples of the country’s offensive in Latin America.

“In this hemisphere, even when dealing with the Venezuelan crisis, the Cuban problem is ignored. So, what we have to tell our friends is you can’t resolve the metastasis without resolving cancer,” said former Congressman Lincoln Díaz-Balart of the Instituto La Rosa Blanca/The White Rose Institute, who in 2009 recognized Cuban recipients of the National Endowment for Democracy’s Award.

“Dictatorships have always resorted to data manipulation for political purposes. This isn’t new. What is really disturbing is that Western intellectuals continue to buy the propaganda of the oldest tyranny in the Americas,” adds former diplomats @AlbertoMiguelF5 #Cuba. 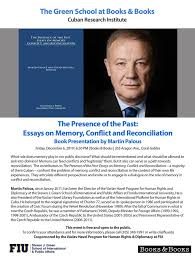 Dr. Martin Palous is the Director of the Havel Program on Diplomacy and Human Rights at Florida International University, the Director of IDEAS for Cuba, a collaboration between FIU, Columbia University and the Inspire America Foundation, author of The Solidarity of The Shaken: Jan Patocka’s Legacy in the Modern World and co-author of The Presence of the Past: Essays on Memory, Conflict, and Reconciliation.

He was one of the signers of the Charter 77 with Nobel Prize Winner, President Vaclav Havel of the Czech Republic. Dr. Palous went from dissident to serving as President Havel’s Ambassador to the UN and the US. A longtime advocate of democracy for Cuba and other countries still living under communism, Dr. Palous divides his time between Miami and Prague and is an advisor to the Czech Foreign Ministry.