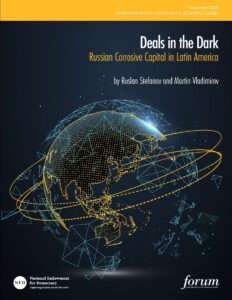 Civil society–led efforts to expose domestic and foreign state capture practices are the most effective check on potentially corrosive capital inflows—and their adverse knock-on effects, according to a new report.

In Deals in the Dark: Russian Corrosive Capital in Latin America, analysts Ruslan Stefanov and Martin Vladimirov, assess the Kremlin’s strategic corruption in two Latin American democracies—Argentina and Bolivia—which experience recurring governance challenges common to other states in the region, the authors suggest. Although these countries do not represent the biggest share of Russia’s economic footprint in Latin America, they illustrate the early stages of politically driven investment initiatives from authoritarian states.

It is critical to understand the mechanisms and strategies linked to corrosive capital, or opaque financial flows from authoritarian states that undermine the rule of law and democratic governance in other countries – an essential step toward preventing more comprehensive authoritarian influence, Stefanov and Vladimirov contend in the latest report in the Sharp Power and Democratic Resilience Series from the NED’s International Forum.

KEY FINDINGS:
1. Civil society groups in Bolivia and Argentina require more advanced means to conduct investigations into corporate ownership, foreign investments, and intergovernmental agreements involving Russia and China, in order to flag high-risk deals in which there is a risk of state capture.

2. There is a need to create regional NGO networks focused on recurring state capture vulnerabilities in Latin America to broaden awareness of the common loopholes that allow for the entry of corrosive capital, as well as attempts to lock countries into costly and asymmetric economic relationships.

3. Governments in the region should consider strengthening their anti–money laundering legislation and working on the creation of independent institutions for financial intelligence and tax collection.

4. Civil society should advance efforts to close existing geographic, socioeconomic, and racial cleavages, which are exploited as part of social media disinformation campaigns in favor of authoritarian interests.

5. The weaponization of trade and capital by authoritarian states would be better combated through a stronger policy of strategic investment by leading democracies, which would carry with it the introduction of more competition and transparency.

It is critical to understand opaque financial flows from authoritarian states that undermine the rule of law and democratic governance, says the latest report from @ThinkDemocracy‘s sharp power series. https://t.co/Gn9LA5m9rH