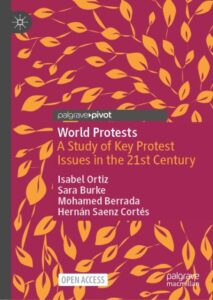 Democratic failure is the principal factor behind a tripling in the number of protest movements in less than 15 years, according to a new analysis released this week.

“What these protests [from 2006-2020] have in common—regardless of where they take place geographically or where their demonstrators are on the political spectrum—are failures of democracy and of economic and social development, fueled by discontent and a lack of faith in the official political processes,” the study states:

Our analysis shows that the number of demonstrations has increased steadily since 2006 and that protests have become more political due to disappointment with malfunctioning democracies, frustration with politicians, and a lack of trust in governments. By 2020, there were fewer protests about a specific issue (e.g., an education policy reform) and more “omnibus protests” in which demonstrators raised demands related to many issues. Not surprisingly, the most prevalent demand of protesters around the world in the period 2006–2020 was for “real democracy.”

“Formal representative democracies are perceived around the world as having served the elites instead of the people,” the authors add. “A deep crisis in political representation is felt and articulated even by average citizens (e.g., the middle classes) who do not consider themselves social or political activists.”

World Protests: A Study of Key Protest Issues in the 21st Century, by Isabel Ortiz, Sara Burke, Mohamed Berrada and Hernán Saenz Cortés, is an initiative of Germany’s Friedrich-Ebert-Stiftung (FES) and the Initiative for Policy Dialogue, a nonprofit group based at New York’s Columbia University.

A majority of the protests — some 54 percent — were caused by a perceived failure of political systems or representation, with around 28 percent prompted by demands for “real democracy,” the most common of protesters’ demands.

“We need to understand that protests are not a verboten behavior but a core tenet of democracy,” said Michael Broning, director of the FES New York office. HT: Washington Post.